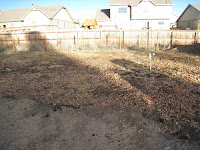 50% or more of the work for growing a giant pumpkin isn't done during the growing season. It is done in the fall and early spring. It doesn't matter how great your pumpkin seed genetics are if you don't have a great soil to grow it in. I'm starting a new patch for 2009. My good neighbor Chris is allowing me space on his 3 acre property to grow 4 plants next year. A BIG thanks to him for letting me do this. He has gone above and beyond by having his employees use his earth movers to help me move the soil and compost piles.

Soil preparation starts with a soil test. Unless you know what is in your soil you don't know what you need to add. The soil for my new patch was pretty poor. It was compacted, low on NPK, low organic matter and had a high ph of 8.1. To build the soil I added poultry compost, alfalfa meal, bone meal, green sand, humic acid, organic 10-5-5 fertilizer with calcium, tree leaves, elemental sulphur, peat moss and aluminum sulphate. That was all rototilled in deep. 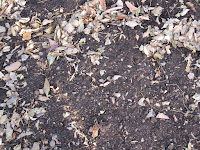 After that I put down a cover crop of annual rye grass and white clover seed. I then spread a 4-4-5 fertilizer with mycorrhizal fungi and sprayed it all down with Neptune's Fish & Seaweed, compost tea, molasses and some fat free milk. The last 5 items were added to help build the microbiology in the soil. The good bacteria and fungi will then start working those soil amendments and turn them into great soil. After that was completed I then ran the sprinklers and covered the main growing areas with 10x25 clear plastic sheets to help build warmth in the soil to get the cover crop going before we get a hard freeze.

In early spring I will do another soil test and will probably add additional composted manure and other amendments as needed. I will also add some worms to the soil as I didn't see any in the dirt today. 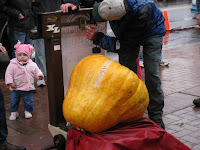 Congrats to my daughter and dad on both getting 3rd place in the Arvada Festival of Scarecrows pumpkin competition in the adult and junior divisions! Dad's came in at 183 pounds and my daughter's came in at 82 pounds.
Posted by Jamie at 10/18/2008 11:32:00 AM No comments:

After sorting through the weigh-off results this year I have come up with the following list of proven hot seeds. The criteria to make this list was that at least two pumpkins had to weigh over 1,000 pounds in 2008 to qualify. Many of the seeds on this list have been hot seeds for a while. Some are new. There are probably twice as many good seeds out there that are not on this list that will never see dirt. Pumpkin seed selection is all about mitigating risk. Growers only have so many spots to grow on so they have to make decisions each growing season. The seeds that get selected more often is a result of a popularity contest (growers with famous names tend to get grown more), marketing (seeds that get talked about tend to get grown more) and proven results. The following list just shows the seeds that tended to grow big pumpkins in 2008 based on weigh-off results:

Of these seeds the biggest newcomer standout for 2008, in my opinion, is the 1566 Rodonis. Almost every pumpkin grown on this seed hit over 1,000 pounds and it saw a lot of dirt. The other two seeds to watch are the 985 Werner and the 1566's little brother the 1161 Rodonis. The 1156 is the reverse cross of the 1566. This seed saw less dirt but did equally as well this year growing two pumpkins with an average weight of 1,365 pounds. Steve Connely's pumpkin grown on the 1566 hasn't hit the scales yet, but if it makes it this Saturday as a new world record the demand for these two seeds will rightfully go through the roof. I and Bill have an ongoing argument as to whether he knows how to pick genetics. He says it was just luck. I believe the 1566 and 1161 are going to be the next 1068 Wallace of pumpkin seeds. Time will tell. What other seeds do you think were the hot seeds of 2008?
Posted by Jamie at 10/08/2008 05:45:00 PM 3 comments: 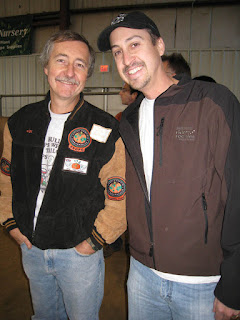 This weekend my wife and I went out to Topsfield, MA to attend one of the largest of the GPC pumpkin contests. The Topsfield Fair. Last year's world record 1,689 pound pumpkin grown by Joe Jutras (pictured left) was presented at the fair along with some other monsters. This year there were no new records (those will be presented in Rhode Island next week if they hold together) but there were still some massive pumpkins.

I think a guy traveling out from Denver to Topsfield was a bit of a novelty. At least one reporter from Salem who interviewed me thought so. All I know is that I like big pumpkins and the 1,464 pound pumpkin grown by Wes Dwelly was quite a sight to behold. Makes the biggest ones in Denver look like child's play. 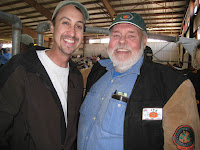 Bill Rodonis and his wife were at the event and it was great talking with them. Super nice guy. Bill grew a 1,566 pound pumpkin last year that was a world record holder for 20 minutes. Bill couldn't grow this year because of a knee problem, but you saw a sparkle in his eye every time a pumpkin went to the scale that was grown on his seed. You would of thought he grew it himself. Thanks Bill for taking the time to talk with me!

Steve Connley was at the event and I had a chance to be introduced to him. Steve has a pumpkin taping out at an estimated 1,900 pounds on the vine right now. If it can survive 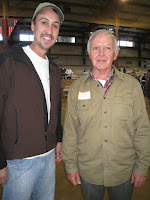 another 5 days it may be a new world record. Jutas says he has a 1,600 pound pumpkin on the vine that is still growing so it will be interesting to see who goes heavy and who goes light.

I also had a chance to get to know Hooker, Sperry, Ed, Craig, Duff, John and a bunch of other really nice guys from all over New England who share the same passions as I do. Thanks to all of you too!

In the end it was all about the pumpkins however. Lots and lots of them at a really well run event. At the very last it came down to these three big ones. I'm hoping for something like this next year in my patch. Send me some of those seeds guys!