Spoke to the local Arvada Optimist club this week on how to grow giant pumpkins. I wasn't sure going into it how many of them would be interested in the topic, but nobody fell asleep and they all seemed very interested. I asked who wanted seeds and almost everyone asked for one so I figured they must have been into it.
Posted by Jamie at 3/31/2010 07:34:00 AM No comments:

I believe I have finalized my 2010 seed lineup. Very grateful to the kind growers who gave me the seeds! Especially grateful to Eddy for the 1385 Jutras. I'm sure I got way more from him then I gave to him. Lots of generous growers out there. 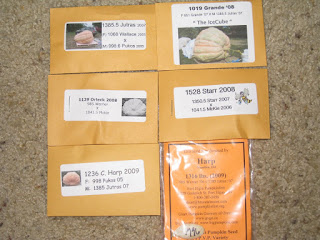 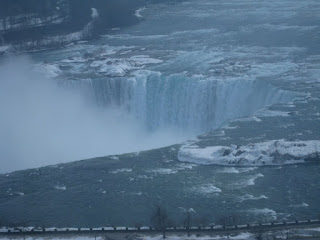 This last weekend I went to the pumpkin seminar in Niagara. The three day event was a lot of fun and very informative. After arriving in Buffalo the Biz, Wiz and myself went to the Anchor bar with Schweigert to get some of their world famous wings. The Anchor bar is famous for being the inventor of buffalo wings. At the Anchor bar we met up with Ron Wallace, former world record holder and a really nice guy. I had many highlights on this trip but being able to sit down and ask Ron a whole list of questions was a real highlight and he was gracious enough to thoughtfully answer everything asked by everyone.

Off all of the seminars at the conference the most interesting for me was John Tabernas on soil. I've spoke with John last year after Thad Starr had hooked me up with him and it was a real pleasure. Talking with John about soils is like drinking from a fire hydrant. 70% of the time he is over my head, but what John has been doing this last year with his lab is soil and tissue sampling on Atlantic Giant pumpkins with top growers to determine what these pumpkins really need. Some of the things he said really turned the heads of a lot of heavy hitters. Like suggesting that we are over watering the pumpkins late in the season. I video taped this section of the conference and I'm going to need to watch it a lot of times before I can start to fully grasp the ramifications of his suggestions.

Another highlight from the trip is the little prank pulled on the Biz. Eddy and the Wiz had hatched a little plan over the last couple of months that I was a part of but didn't know all of the details until it had happened. Eddy was talking at the table and said he wanted Jim's 1019 Grande seed. Jim said he didn't bring any seeds so I pulled out of my pocket the 1019 that the Wiz had given me for the joke and I said, "Well I've got one for you Eddy." Eddy then handed me a 1385 Jutras that he had promised me but the exchange looked like a trade. Gary then said, "I've got a 1019 for you too" and handed Eddy the packet. Eddy then handed back a packet that I only got a glimpse of but it looked an awful lot like a 1068 Wallace packet. Once it was in the Wiz's hand I looked closer and it was a 1068 Wallace packet and the envelope was sealed. I'm not going to say what was inside that packet but there will be some good genetics in Colorado in 2010. 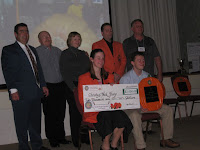 At the conference the top growers from last year were honored. Of that group I got some time with Don Young who grew two 1,600+ pound pumpkins this last year. He was a really great guy and more than willing to talk and share ideas. It was fun watching the segment of him on Conan Obrien this last fall with him.

Patch prep time is just around the corner now and the warm Denver, Colorado weather of the last few days is getting all the locals hungry to start planting. I started with some minor patch prep yesterday.
Posted by Jamie at 3/17/2010 09:01:00 AM No comments:

It must almost be pumpkin season

The warm weather has brought out the pumpkin growers in full force. Had a nice visit with Joe "the master" Scherber. He made a 1068 Wallace mold and made a gold key ring. Very cool. If the dental thing doesn't pan out for Joe he can always do jewlery.

Also had a nice visit with the Menzines of Arvada this week. They are looking to grow big and I can tell they have the will to do it.