What Fertilizer to Use for Giant Pumpkins & Irrigation Water Flow Rate 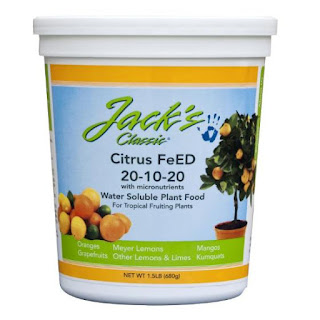 I'm putting this post here for my own notes.  This is something I should have done before, but it is a first time.  It is an estimate of the flow Rate of my Dan Micro sprinkler heads.  I'm using this flow rate to help me better target how much fertilizer to use.  Hard to get an exact number, because the flow through the Dan Micros wouldn't be the same as what would be coming out the end of a pipe or hose.  That is because there wouldn't be any water pressure that is created by the sprinkler heads.  I estimate a flow of about 5 gallons per minute.  I'm going to increase my watering this year as well as my fertilizers.  So this flow rate will help me figure out how much fertilizer to spoon feed per day.

The two main fertilizers I'm going to be using this year are NPK RAW Grow 7-4-5 and Cactus Jack's Citrus FeED 20-10-20.  A citrus fertilizer?  What you see on the label is often more hype than informational.  In most cases a fertilizer is a fertilizer.  The NPK rating is standardized by law.  Now there may be additional ingredients that are specifically formulated for certain plants, but typically there is not a big difference. 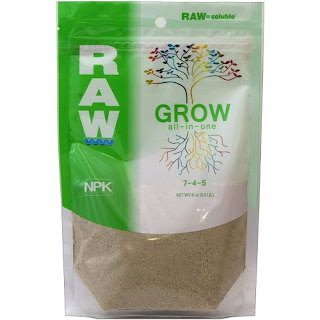 Ross Bowman grew three massive pumpkins this last year using a Peter's 20-20-20 fertilizer.  The 20-10-20 fertilizer I'm using early season is made by the same manufacturer, the nutrient profile is slightly different in percentages (more magnesium in my Citrus FeED fertilizer) and my fertilizer has half the phosphorous, but they are essentially the same.

I'm doing a 20-10-20 because I don't think the plants need a lot of phosphorous, particularly early is the season.  My soil tests in the spring of each year have shown that the numbers don't move down a ton.  Nitrogen and potassium numbers drop a lot in the soil by the end of the season in contrast. The other reason I'm going to use less phosphorous is Beni Meyer in his miracle year, where he grew 3 pumpkins that were bigger than the previous world record, used a 15-8-17 fertilizer (percentage wise roughly works out to a 20-10-20).  I don't know the specific reasons he used that, but if it worked for him, then it can't be a bad way to go and there may not be a build up of phosphorus in the soil over time.

I'm also going to use the RAW Grow 7-4-5 because of the long list of micro nutrients and stimulants (growth hormones) it contains.  It isn't labeled organic, but it leans very close to an organic fertilizer.  Its nitrogen source is a plant protein hydrolysate, which studies have shown to be somewhat superior to other forms of nitrogen.  It is a little more on the pricey side, so using the Cactus Jack's helps keep the overall cost down.

In the end, it may not matter if it is 20-10-20, 20-20-20, 7-4-5, 15-8-17 or something else.  It seems these Atlantic Giant plants are special.  They seem to be able take up what they need, as long as it is available and things are kept generally in balance.  I say "generally" because if you look at soil tests of growers who have grown some really giant pumpkins you find there is inconsistency in soil pH, NPK, organic matter, etc.  So the plants seem to handle a range, but I think the key is balance.