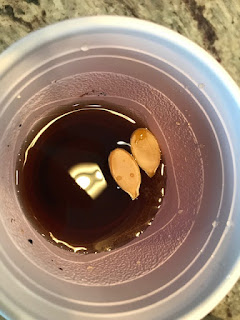 Got the seeds started yesterday.  We are off to the races again.  This year I'm only going to grow one giant pumpkin.  I just don't have time to do two right now and I want to give it 100%.  So my seed of choice this year is the 1825 Sadiq.  I really liked the shape and parentage on that seed.  It is also nice to grow a seed from a personal best pumpkin is already a good grower.

My son is growing a 1398 Janowaik (1501 VanderWielen x 1885 Werner) that went 19% heavy.  This seed I think isn't high on people's radar, but I like the potential.  My son wants to grow something that can be a nice orange, but also grow big.  This one I think can accomplish both.  It was just a dozen pounds off the growers personal best pumpkin.  It had a nice orange color and smooth skin, which I like.  My son grew the 1885 seed last year and got a personal best, so hopefully this one will do even better. 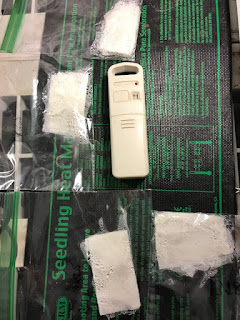 So what we did yesterday is sand the edges of the seeds until the light brown color starts coming through.  This lets the seeds pop open more easily has the seedling pops out.  We then soaked the seeds for about 5 hours in a solution of water, liquid sea weed and humic acid.  Those nutrients help get the germination process going.  Now the seeds are wrapped in a lightly moistened paper towel, inside a zip lock bag and on a heated mat.  The little device between the zip lock bags is a temperature monitor.  I try to keep them between 80 to 89 degrees.  Usually within about 22 to 36 hours a tap root will pop out of the seed tip and I'll then transfer the seeds to their growing pot with a seed starting mixture in it. 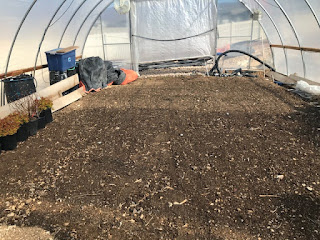 This week I'll be starting the pumpkin seeds.  It is like the opening week of major league baseball.  Everyone is in first place with nothing but opportunity ahead.

A week ago I finally got around to prepping the greenhouse soil.  Later than I prefer, but in time.

My soil test came back with things in pretty good shape, other than nitrogen and organic matter was a little low.  So I add three bundles of sphagnum peat moss, three bags of Miracle Grow garden soil that a friend had given me (I know many growers would not use anything in the patch that said Miracle Grow on it, but 3 bags over 640 sq feet doesn't bother me at all), ammonium sulfate, Azomite, humic acid,  4-4-4 fertilizer, elemental sulfur (doh! I didn't look close at the bag and it was mono-ammonium phosphate--big blunder), copper sulfate, zinc sulfate, manganese sulfate, and a little compost around the planting area.

I tilled that all in and the put down some winter rye seed to help suppress weeds and add additional organic matter.  That will be tilled in around June.  In the photo, you can't see them yet, because the seedlings are only starting to green up, the grass blades are already nearly and inch long.  In two weeks, that grass will look like a healthy lawn.

I'll till in the grass in the planting area the end of this week, so it will be partially broken down when I put the pumpkin plants in the ground.

This year, if the weather will cooperate, I plan to get one pumpkin plant in the soil, much earlier than I usually do, the other will be grown in the grow closet and planted later..  I can control the temps fairly well, so I hope to get the roots growing into the soil, rather than into the sides of the starting pot, to see if that makes much of a difference.

Secrets of Fertilizing a Giant Pumpkin

Do you want to know the secret giant pumpkin fertilizer program to grow a 1,000+ pound pumpkin?  The answer: there really are no secrets.  There is a lot of available good science available however that gives a grower some guidelines to growing their biggest pumpkin ever.  But the truth be told, this is an evolving science that continues to get refined with time and more study, because no company funds big studies on giant pumpkins.

So to answer the most asked question when it comes to fertilizing, "What is the best pumpkin fertilizer?"  The simple answer is that it is the one the plant needs at the time.  Most growers that grow a 1,000 pound pumpkin get soil tests in the spring/fall or both.  Some will also get tissue tests done prior to pollination on the plant to see what it is lacking.  Those tests and the recommendations that come with them are a guide to the grower on what to add.  But they don't give you much in the way of direction for when to add.  Because of this I created my fertilization guide in 2015 that I've updated over the years:

That guide gives you the when, but not so much on how much to add.  The soil test recommendations will kind of give you that.  But only one lab that I know of has ever done any studies on how much a giant pumpkin needs.  Western Labs did that I believe in 2008 and it was a pretty well done study utilizing top growers.   The recommendations from it can be found here:

I saw Jon Taberna do a presentation of the results of his study and a couple of things that stood out to me from that presentation is Jon's amazement with how the Atlantic Giant Pumpkin plant can adjust and take up what it needs on demand more so than most other crop type plants.  Also, how much demand for potassium a giant pumpkin requires.

The most recent larger scale study on Atlantic Giant pumpkin plants was done by Don Chambers in his Giant Pumpkin Soil Study, which I believe concluded last year.  Charts below are from his study:

From the study of 221 pumpkins this was the average of nutrients in the soil for plants the produced 1,200+ pound pumpkins:

Also, another thing to keep in mind.  Soil type matters.  More sandy soil will leach nitrogen and some micro nutrients much faster than others, so sometimes timing of when amendments are to be added and how much will need to be adjusted based on that.  Also, the amount of organic matter affects timing.  If you have high OM, as that soil warms up during the season, it is going to release ammonia and other nutrients into the soil.  Timing and balance are keys in growing a giant pumpkin.

One other thing to remember when it comes to giant pumpkin plants.  The soil may be full of nutrients, but what is available to the plant is just the small area around the root hairs.  If demand for example is high for potassium during rapid pumpkin growth, then the plant can get deficient, event though the soil may be a too high in potassium.  So that is why I recommend spoon feeding during the season small amounts at regular intervals.

Growing a giant pumpkin is a wonderfully complicated process, but by not doing too much or two little you can optimize growth and achieve a personal best giant pumpkin in 2021.