I finally completed the construction of my hoop houses yesterday and put them into place just in time to beat the storm. 80 degrees yesterday and snowing this moring. Welcome to the Mile High City!

My last hoop houses were destroyed so I made new ones that were slightly larger. I'm getting very anxious to get my pumpkin plants into the ground but the weather here in Denver is going to be around freezing at night for the next few days so I'm holding off for now. I'm concerned about the plants roots getting bound so I will probably put them in the hoop houses on Saturday with some heat sources to get them going.
Posted by Jamie at 4/29/2010 09:22:00 AM No comments:

I'm getting very anxious to get my pumpkin plants in the ground. The plants have gotten large enough now that it is getting difficult to get them under the grow lights. This morning we woke up to snow on the ground in Denver and the large range forecast is for temperatures around freezing this coming weekend. I'm debating putting them in the ground on Wednesday. I can keep the plants warm enough that they should survive but I'm struggling with whether it would be better to keep them in their puts a few more days or get them going in the ground. I re potted the plants on Saturday but I don't think I can go much beyond this coming Saturday before I run the risk of getting the roots bound up.

Below are pictures of all of the plants except for the 1528 Starr. Click on the picture for a larger view. The first one is of all of the plants. It is interesting to see how similar the last two plants and the first two plants are. The first plant is the 1236 Harp. The second plant is the 1161 Rodonis. Although they are separated by three generations, genetically they are pretty much the same with 1068 and 998/1231 in them. Other than the 1236 has the crinkled leaves those two plants are almost identical in size and shape. The next two plants are the 1129 Orleck and the 1316 Harp. Both of these plants have 985 in them so I would guess that is where the larger leaves are coming from. The 1528 is equally doing well but the wind started to come up when I was taking these pictures so it didn't make it outside. All of my plants are ahead of my plants from last year at the same number of days but they are a touch behind where I think they should be. I'm not sure my grow lights have enough wattage and the weather outside has been cold, overcast and windy so they haven't gotten much direct sunlight yet. The color on all of the plants look good however so they aren't doing to bad. Leave a comment below to tell me which one's you think I should grow... 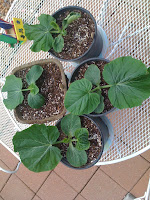 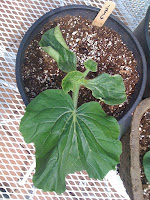 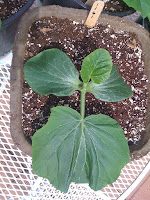 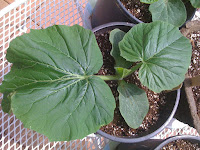 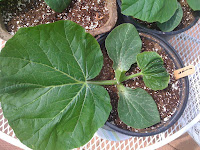 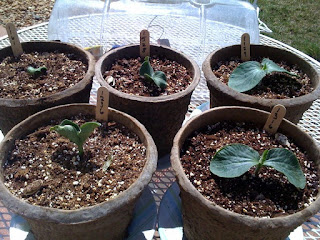 I started soaking my seeds last Monday and Wednesday and now the pumpkin plants are 4-6 days old since the germinating process began. To the right is a picture of all of the plants except for the 1019. 1316 and 1129 are the biggest so far, but the 1528 is on par with those two even though it is two days younger. 1161 is a bit small and the 1236 has those funny crinkled leaves. The weather here in Denver is beautiful so I decided to let them all do a little sunbathing today. Click the picture for a larger view.
Posted by Jamie at 4/19/2010 03:02:00 PM 4 comments:

Kids Excited to See Their Pumpkin Plant Pop Through the Soil

Which One Will Grow the Big One?

The Patch is Tilled and We Are Almost Ready to Roll 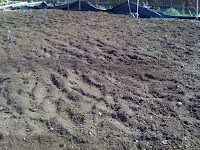 I tilled my amendments into the pumpkin patch today. Add 17 pounds of gypsum, 35 pounds of alfalfa meal, 2 pounds of magnesium sulfate, 20 pounds of PAM, winter rye grass, two bags of peralite, 1 bag of vermiculite, 2 pounds of epsom salts and about 3 1/2 yards of very old composted cow manure. I really like the tilth of the soil and where things have come from 1.5 years ago when I started the patch. For some reason my potassium shot up in my last soil test but for the most part, after the amendments I have added, we should be in good shape this season.

Next steps will be to finish off the new hoop houses I started two weeks ago, add the hail netting structure and put in two new sprinkler heads.
Posted by Jamie at 4/15/2010 10:52:00 AM No comments: 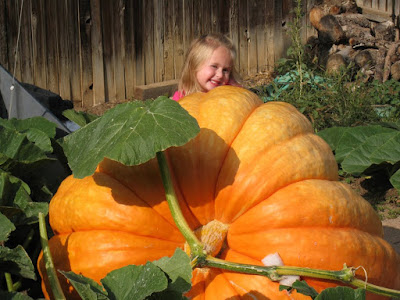 Every grandparent in the 755 Johnson has the prettiest orange pumpkins that you could find. It is only missing the 500 Northrup and in my book it would have all of the best orange genetics available in Atlantic Giants. The 755 Johnson took second place for the Howard Dill Award in 2008.
Posted by Jamie at 4/14/2010 02:31:00 PM No comments:

We have Pumpkin Plants!

The Pumpkin Season has Officially Begun!

My wife would tell you that the giant pumpkin season is a year around hobby for me (and that would be true) but we are now offically off and running. At the Rocky Mountain Giant Vegetable Growers Spring Meeting on Saturday Joe Scherber announced he had already started his seeds and I know that got more than one grower thinking about their start date.

Last year I planned on starting on the 15th but illness made me wait until the 18th. With the weigh-off last year on September 26th I decided that anything after the 15th was to late to get started. I'd rather let my vines run a little longer with an early start date. This year the weigh-off is on the 25th so I decided to sand and soak my seeds tonight. Right now my seeds are wrapped in a lightly damp paper towel in a 87 degree closet. Hopefully a little root will be popping out of the seeds in the next 24 hours.

This year I'm doing one thing different in my seed starting pots. I've added a little Azos (Azospirillum brasilense) to the pots. Azos is a nitrogen fixing bacteria that will literally take nitrogen from the air and give it to the plants in a usable form. This bacteria comes from the jungles of Brazil. In Niagara they talked about seed starting using Azos where they lightly dusted the seeds with Azos before they were put in the pot and they showed pictures of the trial and and the control plants. The Azos plants in the pictures were literally twice as big as the other plants. I planned on doing some seed starting the same way they did in the trials until I heard the results of the Wiz's trial plantings. What he found was that the Azos plants were much more vigourous growers but he also found that they grew to fast in most of the plants riped off a cot leaf when it was coming out of the seed. Now the Wiz admits that he might have put on to much Azos on the seed and the seeds weren't sanded, but that scared we away a little so I put my Azos in the potting soil rather than on the seed to avoid those kinds of problems.

The next seven days is always a little anxious for a giant pumpkin grower. You spend a fair amount of time deciding which seeds to grow and thinking about the possible crosses you could do with those seeds, but you never know if the seeds will germinate. Last year I tried starting a 1450 Wallace but didn't have any luck with it (a common problem with the 1450). This year I started a couple of backup plants just in case something doesn't work out with the pumpkin plants that I plan on growing. I'll actually put my backup plants in the ground a couple of feet away from my "main" plants and if they are outperforming the main plants I'll rip the main plants out of the ground.

Taking the good advice of an excellent grower I added 3 1/2 yards of composted cow manure to the patch today. My potassium is high in the patch (we are either going to grow a big one this year or we are going pop them all) so I debated weather to add the compost but the advantages of adding the compost outweigh the disadvantages so I evenly distributed it around the 900 sq foot patch. In the next week or so I will add som gypsum, calcium nitrate, peralite, vermiculite, PAM and corn meal to the patch and roto till the area where the hoop house will be and then a few weeks after that I will rototill the rest of the patch so the rye grass has a little more time to grow. The corn meal is being added to add trichoderma to the patch.
Posted by Jamie at 4/06/2010 06:53:00 PM No comments: