A Touch of Fertilizer this Morning

I lied. Yesterday I said no fertilizer this week but I noticed that growth on both plants had slowed down and that the vine tip on the 1236 Harp looked a little stressed so I gave both plants a very small touch of blood meal and alfalfa pellets to help it along. I haven't given either plants much in the way of nitrogen this season and I was concerned that the plants were bonking so a figured a little wouldn't hurt in this case.
Posted by Jamie at 6/30/2010 11:27:00 AM No comments:

I gave both plants some compost tea this evening. No fertilizer this week since there are new pollinations on both plants. The 1236 pollination at 11' seems to have taken. The pumpkin is shiny and still growing. Hoping that the new pollination on the 1161 will lay down tomorrow. The first 5 vines on each side of the 1161 will probably be terminated by the end of this week. The main on the 1236 will be at the end of the patch probably this week as well. I'm ready to be done with vines and start growing some big pumpkins.
Posted by Jamie at 6/29/2010 08:32:00 PM 2 comments:

The pumpkin on the 1161 at 9' has been a slow grower so far. To early to worry about it, but hopefully this plant will be kicked into high gear in three weeks. The vines and root system of this plant are to good to not grow big.

The 1236 pumpkin that was pollinated a few days ago seems to be doing okay. Still shiney and growing and that is the two most important things at this point.
Posted by Jamie at 6/28/2010 12:03:00 PM No comments:

Hot in the Pumpkin Patch Today!

Its 11:00 in Denver and it is already 93 degrees today with a forecasted high of 99 degrees. Not good pumpkin growing weather. This year's plant seems fine up to about 92 degrees and then after that the heat starts burning up the new leaves. I saw a little of that yesterday on the new leaves on the side vines.

I split 1/8 cup of fish & seaweed between both plants yesterday evening. Between that and the warm night last night caused a fair amount of growth before this morning. Seemed like there were new long tendrils everywhere today.
Posted by Jamie at 6/25/2010 11:05:00 AM 4 comments:

Pics from the Pumpkin Patch

The first picture below is of the 1236 Harp. This plant likes to grow long faster than it grows wide. I pollinated a pumpkin at about 11' where the green chair is located and another at around 9' where the white chair is located. Second picture is the 1161 Rodonis. I'm still really liking this plant. Great leaves, massive root system. Not as fast growing on the main as the 1236 but it grows some great side vines. One pollination at 9' and another coming in the next few days at about 13'. I have my weed cloth down with a few inches of sand on it now for the pumpkins to grow on. The sand allows the pumpkin to slide as it grows and helps moisture drain away quickly so the pumpkin doesn't rot on the bottom. Gave the plants some compost tea yesterday and CO2 with magnesium the day before. 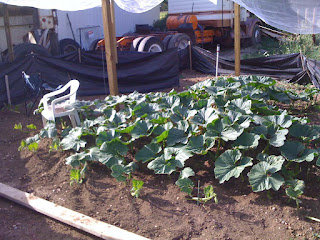 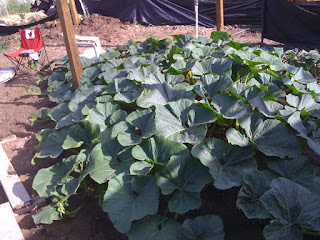 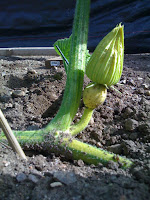 This morning I pollinated on the main a pumpkin at about 9 feet (pictured right) on the 1236 Harp. Probably won't be my keeper. I've got a female at 11' coming on the main that will be ready for pollination in the next week. The 1161 has a female at 13' as well so I may have my two possible keepers coming on. Timing is just about right too as I anticipate pollinating them on around the 23rd to 27th which is just about the perfect time.

Last night I did some foliar compost tea with fish, seaweed and a touch of blood meal. Figure I would try to give a little push to the plants before the next pollinations take place to try to get as much vine as possible before pollinations. About 14 days after pollination the vines slow down a lot in growth.

Finally finished the patch setup for this season (the wife is very happy). Put in two additional sprinkler heads today to give better water coverage. I was finding in the past that the leaves were blocking the water so that there were big dry spots under the canopy. Now I'm hitting the leaves from three of more directions. Wish I had a dan micro setup but this will do for now.
Posted by Jamie at 6/19/2010 05:41:00 PM 4 comments: 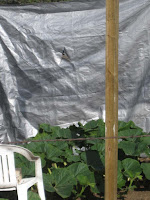 Around weigh-off time last year I thought a lot about how to deal with the cool Colorado nights which seem to slow down our pumpkin growth a lot. The best practical (i.e. not a ton of money) method I came up with was reflective tarps so the plants would warm up faster in the morning. The theory is if the air can be warmed up a little faster in the cool of morning by reflecting the suns rays until 10:00am we might gain 15 minutes more growth each day. That may not seem like much, but over 90 days that can add up to nearly 1 more growing day over the course of a season which should mean more pounds on the scale. It might be crazy but I thought I would give it a try.

I've got the mister sprinklers going these days on the timer. Every hour from 11:00 to 4:00 the sprinklers run for one minute which is just enough to cool the leaves off in the heat of the summer days and keeps leaf burn down a lot.
Posted by Jamie at 6/17/2010 02:13:00 PM No comments: 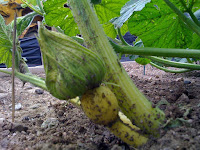 It has been almost 11 months since I've had a pumpkin. It is finally growing time again. The picture to the right is the first pumpkin on the main for me to pollinate. At about 9 feet out it is probably not going to be my keeper, but you never know which ones will take so I will be pollinating them all. For some reason I only pollinate on days that are really hot. Tomorrow will be near 90 degrees with high winds so it must be pollination time. I'm a little early in the season for pollination. About another week from now will be perfect. Last year I pollinated my first at about this same distance on June 27th so we are running about 11 days ahead of last year.

To the right is a picture of the first pumpkin. A little mud rains from splashed from the hail storm. I like the shape of the pumpkins this plant is throwing. Looks like I'm getting the 1450 side of the genetics which is great. A touch of long in the shape with a nice sized stem. I like that!
Gave the plant some CO2 yesterday and some compost tea today.

Don't move around vines, even in the heat of day, that are water logged from three days of heavy rain or else they may crack.

So far it looks like the 1161 damage isn't to bad. One side vine was terminated but the rest of the vines look like they should still grow. Leaf damage for about the first foot of the side vines was realitively bad, but it was only about a foot or so of the side vine ends that got hit so it shouldn't be a big deal.

Almost no growth since late Friday on the plants but they are water logged and primed to grow right now. All of the vine tips are pointed in the air from all of the rain. Once the heat comes back to Denver tomorrow and particularly Wednesday, Thursday and Friday we will probably be growing a foot a day or more.
Posted by Jamie at 6/14/2010 01:42:00 PM No comments:

My plants survived today's storm but the 1161 took a bit of a beating. The hail netting held perfectly, but at times the hail was coming in at a sharp angle and got the right hand side of the 1161 plant. The 1236 maybe got 5-10 holes in it but no big deal. I was thinking just this morning how pristine the leaves looked on both plants. No leaf burn, green color, nearly perfect. Not any more.
The hail netting did just what it was designed to do. 90% of the hail bounced off to the sides and it didn't tear or break at all. Without the netting my season would have pretty much been done. The kids pumpkin plant isn't dead, but very beat up (see last photo). I feel bad for them but it will come back and grow a pumpkin. 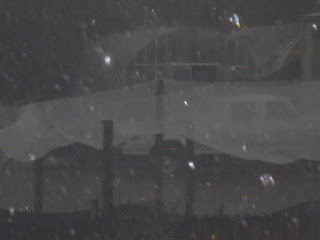 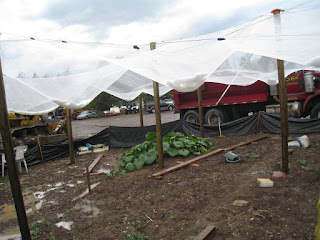 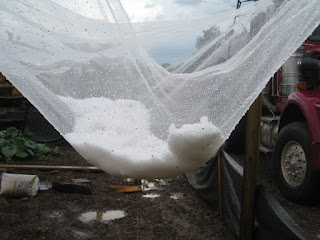 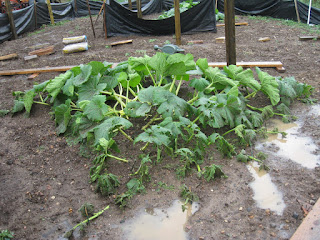 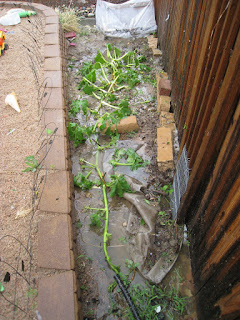 Plants Are Growing Like Weeds & Hail Netting is In Finally! 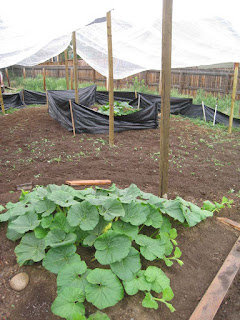 I've killed myself for the last week putting in the hail netting but it is finally done. My wife has been a little cross while I've been digging post holes and pouring cement at 10:00 at night. I'm going to put in some more cross wires to better support the netting but we should be okay for now as long as there are only small hail storms. Of course I expect no hail now since I've gone to all of this work to put up this netting.

The pumpkin plants have been growing like crazy this last week during our warm Denver weather. Both plants are out of the hoop houses and growing about 6-12 inches per day. Right now I'm looking at keeper pollinations around June 18-20th. Way ahead of last year.
The 1161 Rodonis (second picture) is looking more and more like my 1566 plant from last year. I've got a female about 8 feet out on the main now. The pumpkins are looking long in shape but not quite as long as the females I had on the 1566. Lots of burying of vines and adding myco these days. Its fun to watch the vines 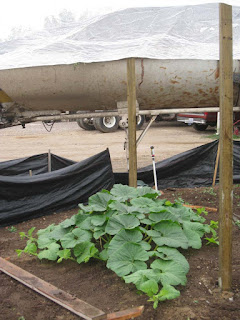 grow but it is sure hard work keeping up with them.
The 1236 Harp (third picture) really kicked into gear the last 4 days. It is still a bit behind the 1161 but the main seems to be growing faster than the 1161 lately. This plant shows lots of signs of vigor.
I did a final till of the soil today. Didn't add any amendments as I think I have everying in the soil that I need. Just needed to uncompact some of the areas that my foot prints had packed down and till in the green manure (aka weeds). Just waiting for the pumpkins now. 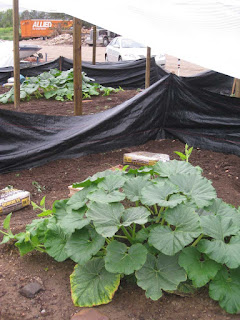 Latest Pictures from the Pumpkin Patch 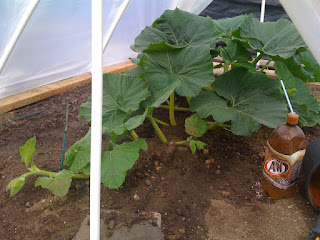 The 1161 plant reminds me a fair amount of my 1566 plant from last year. Maybe not quite as thick of foliage, but the leaves, yellowish vines and plant vigor are very similar in most every other way. I guess it shouldn't be surprising since it is a reverse cross of the 1566 plant. 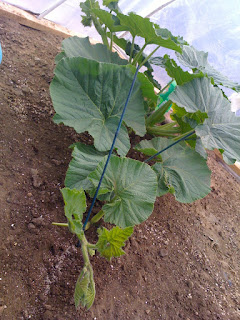