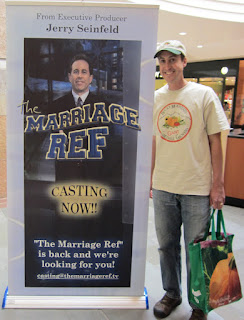 Today, as I mentioned, I did my fall patch prep. I tilled in about 3 yards of shredded leaves, 4 pounds of blood meal, 5 pounds of 7-2-3 fertilizer, five pounds of elemental sulfur, 1 pound manganese, 15 pounds of gypsum and about 5 pounds of alfalfa pellets. After raking it smooth I will let that sit for the winter and I'll get a soil test in the spring to make my final adjustments. In the spring I'll probably add some finished compost with my final amendments before planting.
Posted by Jamie at 10/30/2010 05:14:00 PM 3 comments:

Got Seeds? And another First Place! 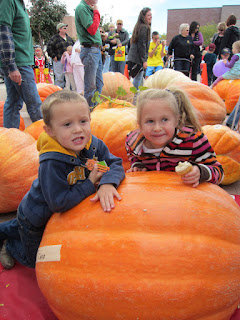 Congrats to Bode and Haddie on a great pumpkin season. Yesterday they got another first place finish with their pumpkin. An eating establishment in Aurora will be putting it on display this next week. I asked the kids if they wanted to sell it and told them it meant they wouldn't be able to carve it as a jack-o-lantern and my son replied, "I want toys." He is a chip off the old block.

Haddie and I got the seeds out of the pumpkin this evening. I really like this cross. Both pumpkins are a nice orange, with an almost ribless skin and the 208 Johnson was flawless inside. If you would like some of the 208 Johnson (1129 Orleck x 1161 Rodonis) and you will grow them next year please let me know and I will get you one. 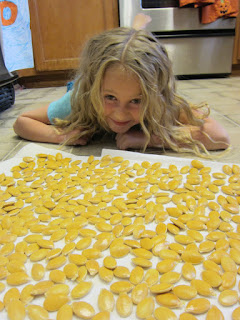 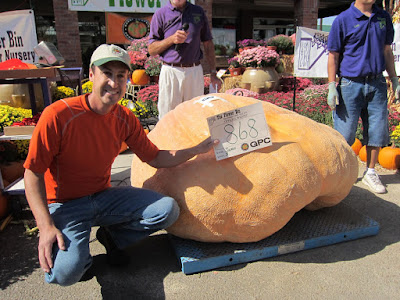 Another bitter sweet day at the weigh-off. Pumpkin #2 ended up a respectable 4th place, I got a personal best, but ended up going about 9% light on the scale again with a pumpkin that ended up weighing 868 pounds. Although it was a bit discouraging I think the seeds in this pumpkin are going to be good ones. The cross is 1161 Rodonis x 1544 Revier. I'm hoping that the 1544 Revier will add the heavy gene and a bit more growing punch to this cross which is the two things that the 1161 needed to improve. The root system and leaves on the 1161 were amazing so I look forward to seeing what this cross could bring next year.

Congrats to Pete Mohr in Longmont on a fantastic new state record of 1,306 pounds. Pete also grew an 1161 and had a great looking pumpkin from it. 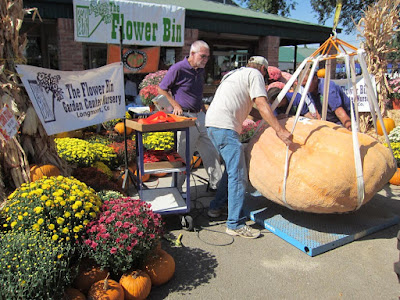 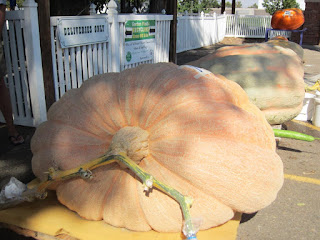 I just loaded up the 1161 Rodonis (AKA Larry) on the trailer for tomorrow's giant pumpkin weigh-off at the Flower Bin in Longmont. The 1161's measurements are only two inches OTT less than the 1236 Harp which translates to only about 24lbs. I was hoping it could catch the 1236 this week but the pumpkin is 95 days old and just didn't have enough energy this late in the season to do it. It kept growing right to the end however putting on 8 pounds over the last three days and a great 210 pounds in the month of September.
Posted by Jamie at 10/01/2010 03:55:00 PM No comments: