What I'm Looking at for the Pumpkin this Time of Year 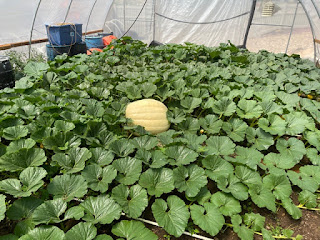 At this point pumpkin growth doesn't appear to be breaking any records this year, it is growing.  I haven't measured in a while.  Over the last few years of growing I've found this time of year to maybe be a little less important and my sanity is better if I just eyeball it.  For some reason my peak growth seems to start a little later here in Midway then it did in Colorado.  Typically at around day 28 the pumpkin really starts to crank up the growth, but how high and how fast, seems to come later here.

What I am reading the plant for right now is what the potential is looking like.  Last year, about this time, my older leaves looked sad.   I believe that was at least in part do to spider mites or maybe aphids.  But the growth of the pumpkin was not good last year until the leaves after the pumpkin got mature in size.  I think that was possibly also maybe due to under fertilizing the first half of the season last year.

This year the leaves look really big, green and healthy.  Even the oldest leaves look to be in pretty good shape.  Vine growth is also good.  By Monday I believe the plant will be fully terminated due to no more space to grow in the greenhouse.

Right now I'm at day 28th for growth, so the timing is pretty good.  What I'm seeing in the plant is it has energy to spare.  Since 85% of the plant is terminated right now I'm having sucker vines popping up that are growing aggressively.  The plant has all of this energy and it just doesn't know what to do with it all.   Leaves on the plant are getting taller and big too.   I think I've got a lot of the 2416 Haist side in my plant.  Once this plant makes the pumpkin the main sink, I believe the pumpkin will want to take off as all of that salad energy transitions to pumpkin energy.  At least that is what I expect and hope to see happen.

Very hot summer this year after a cool spring.  Not sure if the heat is an advantage or disadvantage in my cooler climate, but I think it is an advantage (although don't tell my drought stricken lawn that).   Nights are a few degrees warmer, mornings warm up more quickly and generally I can keep the greenhouse under 89 degrees during the heat of the day, so I think it slightly plays in my favor.

Weather is going to play a descent factor in where this pumpkin ends up.  During the summer I don't see the trend changing until September.   September will be do or die.  Usually I get frost the 2nd week of September, but if the weather can be a little more kind, maybe I can get a full 100 days of growth on the pumpkin to see its full potential.

For a bit, I thought this pumpkin was going to go white (I've never grown a white pumpkin before), but now it looks like it will maybe go yellow, like the 2009 Wallace did.