2145 McMullen Pumpkin Seed & a BIG Thanks 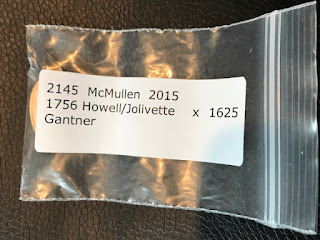 Every so often a hot seed pops up that grows some really big pumpkins. Some are kind of flashes in the pan, where a few big really pumpkin come about, but not a lot seem to come from the progeny and the popularity falls off.  Others seem to create dynasties where most all of the big pumpkins seem to come through the same seed's line.

Since then there was the 998 Pukos, 1161 Rodonis, 1409 Miller that were kind of flashes in the pan, but the next dynasty seed was also a Wallace seed, the 2009 Wallace.  That seed was also a game changer.  I believe every world record pumpkin grown since the 2009 either was grown from or had 2009 genetics in its line.  It could be argued that even today, if there were any seeds left, that the 2009 seed would still be the best seed available.

The new dynasty seed is the 2145 McMullen.  The current world record holder of 2,624 pounds was grown from the 2145 seed.  Also the 2nd biggest pumpkin ever came from the 2145.   This year 15 of the top 30 pumpkins had 2145 genetics.  That is pretty incredible considering the number of different seeds planted in 2017.