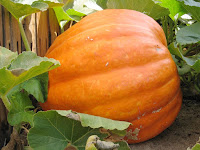 Haddie has been talking some smack with grandpa lately. She says her pumpkin is bigger. My dad's pumpkin didn't get pollinated until the first week of August after a string of aborts earlier in the season. The last two weeks it has started to add some good pounds but it looks like Haddie (my 4-year-old) has got grandpa by about 20 pounds right now. The Arvada Festival of Scarecrows isn't until October 11th so it will be interesting to see if his Dill's Atlantic Giant can catch Haddie's Prize Winner by that time.

It will also be interesting to see if either of them can catch my pumpkin from last year. I think they both have a good shot. Haddie is growing from a seed from last year's pumpkin and it has gotten a little more TLC from her and better soil than my pumpkin had. If the weather will be kind they have a month still to grow so there is a lot of time to add some pounds. Right now they will need to add about 50 pounds to equal last years pumpkin.