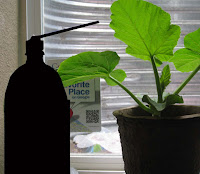 I'm trying something new this year to grow bigger pumpkins. Before I've talked about that there are no real secrets in growing giant pumpkins. Most of the best ideas out there are known by most of the growers. The best growers in the world don't have a secret sauce that grows giants, they mostly have 5-10 little things that they do better or slighly differently than most other growers to add 10 pounds here and twenty pounds there to a pumpkin in the course of a season.

The thing I'm trying isn't exactly new. I've seen youtube videos were people were doing something similar for other applications, but I haven't seen it done this way with giant pumpkins before. I did one test this Spring on a plant that I'm not going to grow and it didn't kill the plant so I think nothing but good should come of it. If I don't literally blow up the pumpkin plant then I expect nothing but good. To the right is a picture of the secret project to give you a little hint with the secret blacked out. On May 24th I'll give the whole story with results.
Any guesses on what this is?
Posted by Jamie at 5/12/2010 09:15:00 AM

This is Adam from Arvada. I look forward to hearing about the details on the 24th.