Pumpkin Patch Pictures and a Lot of Heat

It's going to be close to 100 degrees today and highs in the upper 90s for the next 5 days. All of this week has been hot and it has effected the pumpkin growth. Good growth at nigth and not much growth during the day. Running the misters hard to try to keep the leaf burn down but the older leaves are taking a bit of a beating the last few days.

This first two pictures are of the 1236 and third one is the 1161. I may not win 1st for heaviest pumpkin but the 1236 could give me a shot at the Howard Dill Awared for prettiest. I'm still pushing for big however and both plants just might have enough to do it. The world record 1725 pumpkin at day 31 was at 115" which actually isn't all that big. My goal for the 1236 plant is to equal that and it has a shot at it. 6" a day for 9 days and it will make that goal.
Right now the 1236 is in the zone of rapid growth that usually kicks in between day 20 and day 30 (Joe reminded me yesterday that it is usually around day 23 when it starts). It is in this window and then September that seasons can be made and lost. 30-40 pounds a day is not uncommon. It is the pumpkins that can sustain that growth that typically end up doing the best.
Gave the pumpkin plants some compost tea this evening with 2 tablespoons of seaweed mixed in. 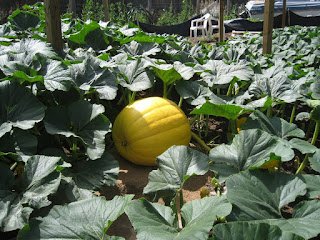 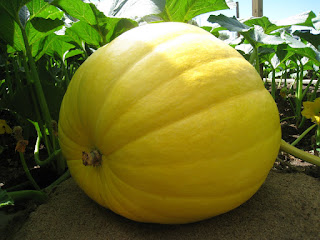 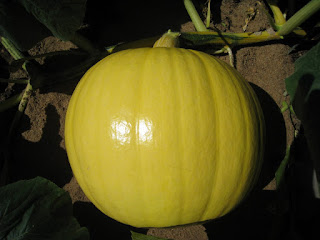 How are you able to put misters on your leaves without getting mildew?

When you have the misters running during the heat of the day there isn't that big of problem with powdery mildew as long as you get the leaves dried out before evening. In the heat we have been having the leaf is dried out by the time the next watering cycle comes through so the mildew doesn't really form. that doesn't mean that come September the plants won't get powdery mildew. That is almost impossible to stop. I use compost tea on the leaves all throughout the season to help keep the powdery mildew away and then use fungicides later in the season to help keep it away and treat it.