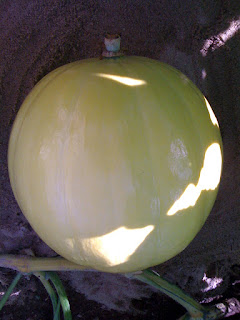 Pictures to the right is the 1236 Harp pumpkin. The pumpkin is much more of a dark yellow than the picture shows. Grew a solid 3 inches overnight. I think it must have it's papa in it. It you look close enough you can see my reflection in that pumpkin because of all the shine in it. Second pictures is of the patch. Lots of leaves. Would like to see some pumpkins popping up over that canopy soon.

I've come up with the names for my pumpkins this year. The biggest one is going to be RedemptionBoy and the second one is going to be LarryBoy. As you may recall last year's was HailBoy and the year before that was DillBoy. DillBoy was named in Honor of Howard Dill, the "inventor" of the Dill Atlantic Giant pumpkin. Last year's was named because of the hail storm that took the plant and pumpkin out. RedemptionBoy is going to be named because hopefully I can have a pumpkin this year that will redeem the previous year's disaster. LarryBoy is a bit of an inside joke. We have some good family friends whose oldest son is name Larry. He is three months older than my son but at 9 months old he was nearly double the weight. It wasn't an unhealthy thing as much as genetics with this kid, but frankly his parents would say he was fat in every direction. I'm hoping to have a Larry pumpkin this year.

Went to the Shenfish, Wiz and Biz patch last night with Joe. All of their plants are looking healthy and the pumpkins are growing big. Shenfish has a monster growing on his 1544 plant that is a wheel. Didn't see Joe's pumpkins, but he mentioned that he has a bigger pumpkin on his 1544 plant than what the Wiz and Biz have. Glad I got some pollen from Joe to pollinate the 1161 with. A lot of growing season left to go however. 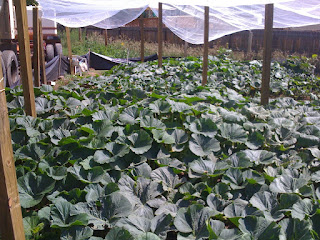 Did lots of vine burying this morning. Between illness and rain I had done very little work in the patch this last week. The ground is still fairly wet. I didn't see official numbers but I'm guessing we got about 1 3/4 inches of rain between the 4th of July storm and the mid-week storm. The plants seem good however.
Posted by Jamie at 7/10/2010 11:39:00 AM