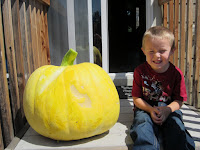 I was walking by the patch, heading into the house and caught a flash of yellow out of the corner of my eye. Turns out it was more than a flash. Found this 69.5 pound pumpkin growing on the 1236 Harp plant. It was a sneaky bugger.

I have a silt fence that goes around the patch and along the back fence the silt fence overlaps where once piece of fence ends and another piece begins. The vine had gotten between the two fences and this pumpkin had been growing there, probably for weeks. That means the main pumpkin may have lost a potential 69.5 pounds in the last few weeks.