Welcome to The Pumpkin Man's, from NBC's The Marriage Ref, Giant Pumpkin Blog 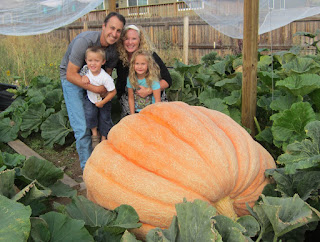 I'm really looking forward to the premier episode of The Marriage Ref tonight. Although I've seen our package that was filmed at our home in Denver I haven't seen the segment that was filmed on stage in New York last December. The whole The Marriage Ref experience was a lot of fun. People have asked me, after seeing the show promos, about Jerry Seinfeld, Ricky Gervais and Julianne Moore and I can honestly say they were all great to be with.
Visit www.facebook.com/giantpumpkins during the show at 9:00 MST for live comments during the show from myself and my good wife Amber to get the inside, back stage scoop on the show.
Want to take a try at growing a giant pumpkin? Follow this pumpkin blog to get regular updates on my two pumpkins I'm growing this year (one pumpkin is named Jerry and the other is named Ricky) and get tips and advice on growing big pumpkins. Visit the pumpkin seed store if you are looking for competition giant pumpkins seeds and take your try at growing a world-record pumpkin!
Posted by Jamie at 6/26/2011 06:02:00 AM

Haha, just watched the episode, congratulations! I didn't think you were going to pull a W, but you did it, nice job! When does the billboard go up & do you know where it will be?

Oh nevermind about the billboard, forgot you only get it if you're the most right of the right people. Good work anyways!

Thanks. The taping of the show was a lot of fun and watching it with many of our friends was equally as good.