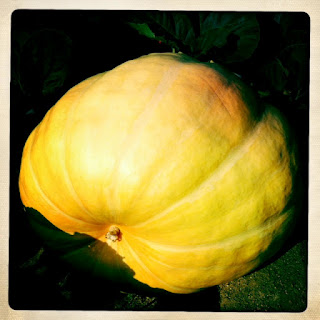 My 8 and 6 year old daughter and son are growing a seed from my 924 Johnson from last year.  Despite the fact that the plant had some early problems they are doing very well this year.  Their pumpkin is estimating at 143 pounds which is only 3 pounds less than their final weight last year and they still have 5 weeks of growing left to go.  Their plant is probably only 120 square feet.  They've been doing a better job of watering it this year and that is paying off for them.  Their personal best was two years ago at 208 pounds.  I think this year they could break that.  I think this 924 seed could be a better than average seed.  This pumpkin looks a lot like last years.
Posted by Jamie at 8/17/2012 09:50:00 AM