Pictured below is the 1775 female that I pollinated this morning.  A nice 4 lober.  The flower on this one was huge. 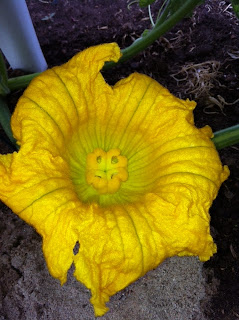 These are the latest pictures of the pumpkin plants.  By the end of next week the main vine on the 1421 Stelts will be close to the length of the main vine of the 1451 Scherber last year at the end of the season.  I wouldn't call the 1421 an aggressive grower, but it is a very good grower.The 1421 probably has 5-6 side vines that are terminated now because they have reached the end of their growing area.