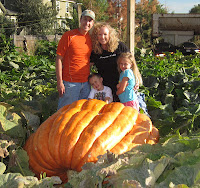 It's crazy I know, but every year I name my pumpkins.   I think it is kind of a fun thing to do and it gives a little personality to the pumpkins.  My past pumpkins:
This years pumpkin will be named, drum roll please:  Elbert and Stanley.

My grandpa was named Elbert and a world class gardner.  I've seen carrots that came out of his garden that were as big around as your wrist.  In honor of him I'm going to name one of the pumpkins after him.  Elbert is also the name of the highest mountain in Colorado.  A great 14er which I climbed a few years back.  So maybe this pumpkin can become Mt. Elbert.

Stanley is the name of my father-in-law and also the name of my oldest and one of my best of friends.  Also seems like a good name for a pumpkin.  So hopefully Elbert and Stanley can get me over that 1,000 pound mark this year.  I'm feeling good about where I'm at right now.  The weather has been fairly good, the plants seem happy and my soil and setup I think is the best I've had since I started growing in this patch.  Time will tell.  Pray for a big pumpkin for me.
Posted by Jamie at 6/19/2013 07:11:00 PM