The Dirty Little Secret About the Measuring Tape; Only the Scale Tells the Truth

Measuring the pumpkins regularly helps me know what environmental factors are affecting the pumpkins growth and sometimes helps me identify problems early, but mostly I just want to know how big my pumpkins have grown (it is a bit of an obsession).  With all of that however you have to keep in mind, come weigh-off day, that the pumpkin's weight on the scale could be much different than what you had anticipated.

I remember looking at the faces of the top three pumpkins at Topsfield in 2008.  Would you have guessed that the pumpkin on the left took 3rd place?  It ended up 150lbs less than the pumpkin on the right.  If the picture was larger you would see that the growers on the right were smiling and the grower on the left wasn't.  His pumpkin went 10% lighter than what the charts said it would.  I've been there.  A few years ago I had a pumpkin go 15% light and I didn't see it coming.  It can leave a bad taste in your mouth for months so be prepared for the scale says, because it doesn't lie. 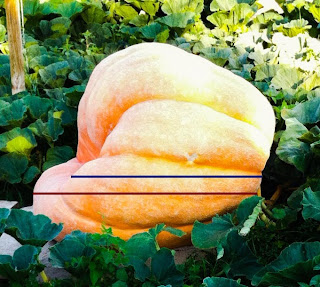 This entire season I've tried to be conservative in my measurements to not get my hopes too high.  Because of this, when I take a circumference measurement, I've gone around the pumpkin where you see the blue line leaving out what one grower aptly referred to as the thrown below it in my measurement.  With the circumference measurement technically I should be measuring around the pumpkin at the red line because it is the "fattest part of the pumpkin parallel to the ground."  I couldn't do that however because, as you can see, that measurement would suggest that there was a lot more pumpkin above the thrown then there actually was because there already is a void above the thrown in my over the top measurement.  I'm hoping that this turns out in my (mental) favor come weigh-off time.

The piece that you can never tell until the pumpkin hits the scale is the thickness of the pumpkin.  Other than one pumpkin I've never known for sure if a pumpkin was going light or heavy.  One thing I've noticed is that pumpkins that tend to be very wide and not very tall tend to go lighter on the scale.  I think this is because the weight of the wider pumpkins tends to smoosh out the pumpkin under its own weight which kind of gives a false circumference measurement.  On my pumpkin you can see that with the thrown.

Great post Jamie and thank you for the advice with my vole problem.

I know last year when they revealed the weight of my pumpkin I was shocked that it weighed 13% lighter than than what I was expecting. It probably would have been priceless to get a photo of my face when the numbers were revealed.

Lets hope we both go heavy this year.