For years I've noticed something and pretty much have only grown seeds from what I would cal the "Kingly Line" of giant pumpkin seeds.  In 2005 Joe Pukos made a cross of seeds from the two biggest pumpkins the year before.  What he ended up with wasn't overly impressive but he had some interesting genetics in that cross.  Two years later Joe Jutras grew the world record 1689 pumpkin.  With that world record plant he pollinated a 1068 Wallace and that pumpkin was on pace to grow as big as the world record pumpkin until he lost that pumpkin at 1385 pounds in the middle, late part of the season.  From the 1385 Jutras was grown the famous 1725 Harp world record pumpkin.  The seed of that pumpkin is now a legend. 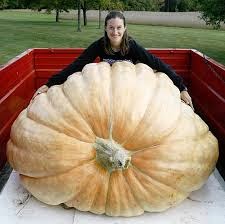 In Kristy Harps world record year I emailed with she and her husband Nick.  Two very nice people and I got to meet them that following winter in Niagara and got to hear Kristy talk about her world record pumpkin.  From Kristy's words it was apparent that the seed that grew the 1725 was something special.  With all due respect to Kristy, you could tell it was more the seed than the grower that produced that massive pumpkin.  She herself said at the seminar, "I'm not a heavy hitter." Which seemed kind of funny at the time because she was in a room with the best growers in the world declaring that she wasn't anything special but at the same time she had grown something bigger than anyone had ever come close to before.  She knew she had grown something special.

That next year I grew the 1236 Harp which was pollinated by the world record plant.  However, the 1236 didn't grow but one descent sized pumpkin that year and I ended up with an 800+ pound pumpkin.  That seed didn't get the Kingly Line.  What Kristy had done in her world record season was self pollinate or in other world pollinate the female flower with a male flower from the same plant and that turned out to be genius.  She was criticize by some for doing it at the time.  In the sport selfed pumpkins where definitely looked down upon at the time.  Nobody would be criticizing her after the next few seasons however.

The next couple of seasons produced world record pumpkins, but they weren't from the Kingly Line.  Which brings up a good point.  There are probably hundreds of seeds each year that don't get planted or don't reach their potential that have world record genetics in them.  The simple fact is that there are too many seeds produced to ever get planted and not enough plots. 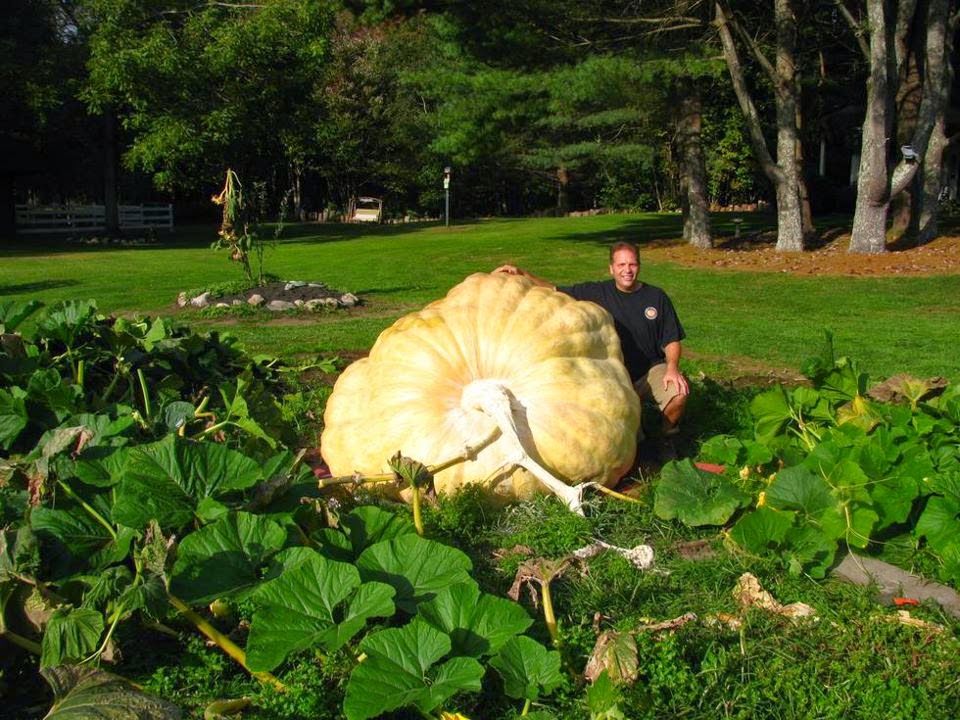 Three seasons after Kristy's world record year Ron Wallace grew a 1789 pound pumpkin that he lost in August that was grown from the 1725 seed.   The next season he planted another 1725 seed that produced one of the most memorable world records ever.  The first one ton pumpkin at 2,009 pounds.

I got to see that world record plant in action and it was something special.  A local grower got a cutting of that plant which was kept alive all winter in a greenhouse.  The plant had bad powdery mildew and it just verily survived the shipping but once it kicked into gear you could tell it had something special in it. 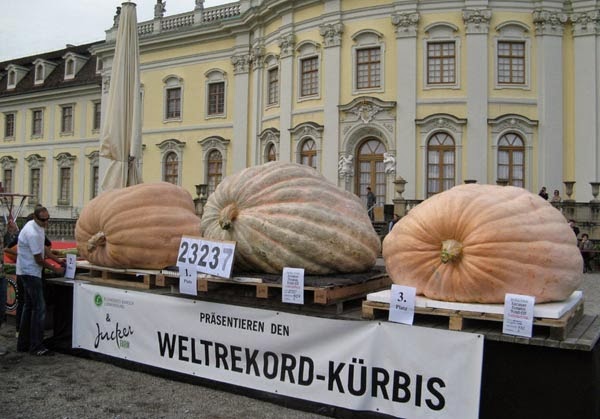 The next season a new world record was grown from the 2009 seed.  This last season a lot of 2009 seeds were grown along with 2009 crosses from the year before.  16 of the 20 biggest pumpkins grown in 2014 are from the Kingly Line 1725 Harp seed that Ron Wallace grew that produced the 2009.  That includes the three world record breaking pumpkins that Beni Meier grew this last season, the biggest being from the 2009 seed itself at an amazing 2,102 pounds.  Which by the way wasn't the biggest pumpkin ever grown by Beni.  The year before he had grown a  2,323 pound pumpkin that he lost weeks before the weigh-off that was reported to still be packing on pounds when he lost it and it was grown from the 2,009 seed.  The Kingly Line still lives on.

It should be noted here that people grow genetics that have been proven, so statistically speaking if a seed is grown more often it in all likelihood is going to produce bigger pumpkins just because more and better growers will be planting it.  That isn't the case with the 2009 seed.  Some people talk about grower techniques improving, but there hasn't been an improvement in techniques that I'm aware of that would make weights jump up hundreds of pounds for dozens of growers in just a couple of seasons.  Statistically I don't remember a seed since the 1068 Wallace that has produced more big pumpkins consistently than the 2009.  A 1700+ pound pumpkin just a few years ago astonished growers.  This last season a 1600-1799 pound pumpkin is almost a footnote.  There were 24 pumpkins just this last season that went to the scale that were over 1800 pounds.  For a good part of the country weather was not that good for growing so what was produced is even more astonishing.

I got a 2009 Wallace seed from Ron and I didn't even ask for it.  It was very kind of him to send.  That next season I tried to start it and it was the only seed to not germinate which was disappointing.

This next season I plan to grow a 282 Scherber if Joe can get me a few.  The 282 seed is a selfed pollination from the world record clone plant that I had mentioned previously.  Joe grew a fantastic pumpkin from that seed this last year.  The pumpkin was in state record territory when he lost it about 3 weeks before the weigh-off.  It was very thick inside he said when he cut it open and estimated it could have ended up at 1,600 pounds but the pumpkin never made it to the scale.

I hope to create my own Kingly Line off that 282 seed this next season.  The season after that I'll be growing some Barron seeds.  If I had room for those they would go in patch this year.  Very interesting cross of the 1730 Werner x 2009 Wallace.

Some interesting pumpkin seeds with that Kingly Line crossed into it can be found here as well as DVDs from world record Ron Wallace talking about his world record season.  A must watch video.