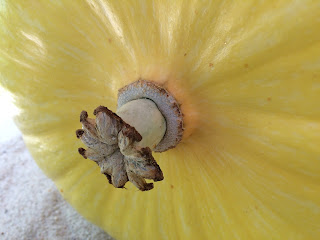 To my surprise, when I went out today to check on the pumpkin I found a hint of orange on the blossom end of the pumpkin.   RMGVG club member Jack, two time Howard Dill award winner, would tell you that I always grow orange (and I do prefer the traditional orange pumpkin) but this year I figured my pumpkin to be more of an off white based on 1985 Millers that were grown last year.  The 1985 Miller pumpkins that I've seen pictures of had a orange stem end , but the majority of the pumpkin is something between white and a pale orange.  I think this one could end up being mostly orange however.  If you see orange at the blossom end this early it typically means a very orange pumpkin at the end of the year.

This evening I sprayed insecticide on both plants.  After talking with Joe about his mosaic problems for an hour yesterday, it reminded me that I need to be diligent with the sprays to keep in the game to the end of the season.  I lost both plants to yellow vine disease in mid-August last year and I don't want a repeat of that.
Posted by Jamie at 7/23/2015 09:34:00 PM