Plants Are Out of their Hoop Houses 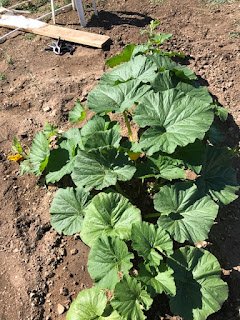 I ended up waiting one more day, but I couldn't wait any longer and got the plants out of their hoop houses today.   The 747 was almost 2 feet beyond the hoop house and a side vine was hitting the side of the hoop house.

I buried vines on both plants today and then sprayed the entire patch with beneficial bacteria and myco.  After that I put up wind fences (a little windy this afternoon but nice temperatures) and watered the plants.

I had a hard time deciding between the two 1685 plants.  In the end it was a 50/50 coin toss, because they were pretty similar, so I hope I chose the right one.

I really like the looks of the 747 plant.  It reminds me of the clone plant in a lot of ways.   Fairly aggressive grower, skinnier vines, but larger leaves like the 1985 plant had.   After that nitrogen, the main vine grew almost a foot yesterday.   A lot of vine burying to do in the next few weeks for that plant.

Both the 747 and the 1685 plant have a female flower that just showed up in the vine tip today.   I'll pollinate both, but I'd prefer not to keep that one on the 1685 plant.  It hasn't filled out much yet and I'd like to see it bigger.  The 747 plant has that female at almost 10 feet.    If something else shows up in the next four feet I'll pollinate it too, but very well might just keep this one at 10 feet.   That plant is growing fast enough right now that it should be in pretty good shape when that female opens up in 10-14 days. 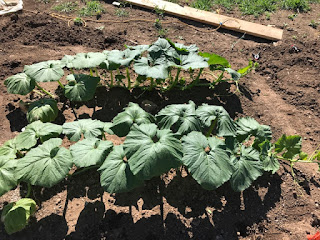