Getting the Pumpkin Patch Soil Prepared for 2020

So this last week I took soil samples and sent them into Western Labs so I know what I have in my soil and to get recommendations on what I need to add.  Both patches came back with very similar results.  The one surprise is that the greenhouse patch I expected to have higher nitrogen since I kind of jacked it up last season.  I'm guessing that since I completely laid off nitrogen the 2nd half of the season the plant used a lot of that up.  I also watered in the greenhouse a fair amount this winter to help flush it out.  Last year my nitrates were much higher than in the greenhouse in the spring.  I wondered why at first, but then realized, 3 feet of snow had gone through the soil leaching out the nitrogen during the winter, where the greenhouse didn't have all that water.  So this winter I watered the cover crop much more regularly and deeply.

Yesterday I turned over the soil in the planting area to start killing off the cover crop, get the soil turned more deeply and also to make it a little easier to till.  I've found when you have a thick cover crop the tiller tines slide accross the grass and it can be a challenge to get a deep till.  Turning the soil makes that a little easier.

My plan is to start my 2005 seed on April 13th and then the rest of the seeds on April 15th.  Karl Haist said my 2005 seed was a little bit of a runt, so it may not be mature and I want to see if it will germinate.  If it doesn't I'll go with one of the other Haist seeds that I have to replace it, so I want to give the 2005 a little bit of a head start so I'll know if I need to start another seed. 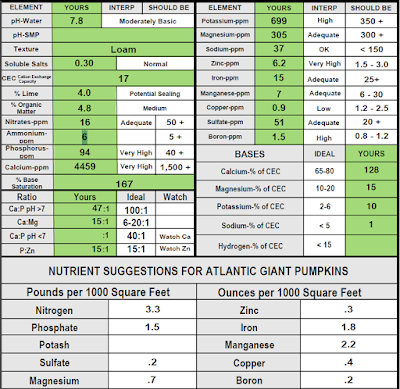