Pumpkin Seeds are Off and Running; Kind Of 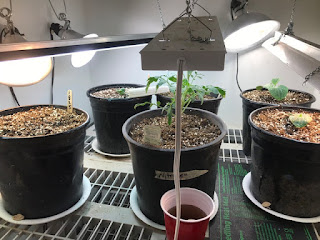 All of the seeds we started eventually germinated and were put into their pots.  My son's seeds were started 8 hours later, but all of his seeds germinated prior to mine and are growing faster.  It is easy at this point to think those seeds are "better."   I have to admit I was envious, but growing a 2,000 pound pumpkin has nothing to do with germination times or growth rates at this point.  If they germinated and are happy, you've done your job.

You might see in the picture that one pot doesn't have a seedling.   The first of my 1825 seeds to germinate hasn't pushed up yet.  I'm thinking it probably won't at this point.  I've never had this happen before.  Not sure what happened to it.  I'm soaking a 2269 Haist seed now.  When that one germinates I'll pull up that 1825 seed to see what happened to it.

The 2269 seed has intrigued me for a while.  Nobody has really grown it and I'm not sure why.  It is a 2003 Haist that was selfed and has all the potential of most other 2,000+ seeds.  We'll see, but maybe I'll grow it.  Won't be making any decisions about that until we have the plants in the greenhouse however.