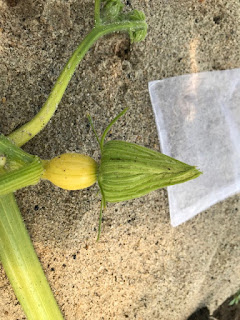 On Monday I cut a leaf off my pumpkin plant and sent it into Western Labs to get a tissue test.  This is the fourth time I've done a tissue test over the years and I found it invaluable.  What you have in your soil isn't necessarily what the plant is taking up.  The reason for this is if you have too much of one thing in the soil it can actually prohibit the uptake of other things in the soil in some cases.  So a tissue test can let you know what the plant is actually getting into it and what it needs.

I got the tissue test back yesterday, just in time for the pollination of a 4 lober this morning.  I'm really hoping this pollination takes, as the timing and placement is pretty ideal.  I selfed the pumpkin, using two flowers from the 1825 plant that I used to hand pollinate with.

On average a pumpkin will grow about 90-100 days.   Right now I'm 98 days from the weigh-off, so weather permitting (which almost never happens for me),  I can get all the growth I can out of this pumpkin.

I don't know why, but I'm always surprised by the tissue test results each year, even though they seem to always come back about the same.  Basically anything in the soil that is leachable, I'm deficient in (common with sandy soil).  I thought I would be high in nitrogen and phosphorous.  In particularly phosphorous, because when I put down the monoammonium phosphate in the spring, I thought I was putting down sulfur, so I over did it (oops).  To see in the tissue test I was low in phosphorous was a surprise.   I was also low in nitrogen, copper, zinc and manganese.   So I'll be applying extra amounts of those to the soil and doing foliar applications over the next week of each.

It has been scorching hot in Miday, Utah this last week.   98-99 degrees every day and some days with high winds.  To moderate the temperature in the greenhouse I sometimes run the misters non-stop for hours to keep the temps inside in the 80s.   Today is supposed to be the last of the high 90s and then it drops into the low 90s for the foreseeable future.

Have had a strange thing with new leaves on the main vine.  All of then are shriveled.  Now sure if it is because of the heat or something else, but something I'll be watching.  Side vine leaves don't seem to have the same issue.