Like I've said previously, neither of my two pumpkins are growing at amazing rates so far but we are so early in their growth it doesn't matter to me at this point. It is the 3 weeks that the pumpkins are in rapid growth stage and putting on 30-40 pounds a day and the month of September that makes or breaks a pumpkin.

The first picture is of the 1236 Harp pumpkin. It looks like this one is going to be a dark orange like it's mama. The 1161 is a slow poke right now, but I just took off the pumpkin at 9' today so I hope it will start picking up the pace. The pumpkin at 9' had the start of some orange coming through around the stem so it looks like this plant is going to produce orange pumpkins too. The pumpkin that I took off is super solid so I'm hoping I got the heavy gene in this plant. It also had a super thick stem. Both pumpkins are bowling balls at this point.

I gave the plants some compost tea with about 1/8 cup of fish & seaweed added last night. 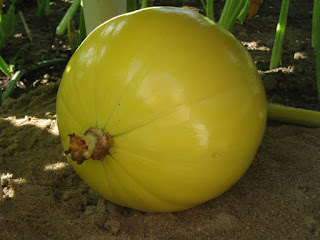 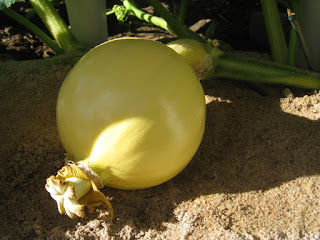