The kids and I did the 10 day measurement on the 1129 Orleck they are growing today. They have been doing a good job of watering it and feeding it leaves (my 6-year-old daughter feels strongley that leaves are the key to a big pumpkin--and she might be right). After the kids pumpkin was devestated by a big hail storm last month it has come back into shape. On day 10 their 100 square foot plant had a pumpkin that is 23 inches which is bigger than my day 10 measurements on either of my pumpkins. I really debated if I was going to keep this plant for myself. It was a really great looking plant when it was in the pot and then it took a bit of a nose dive I decided not to grow it myself. It was growing like a champ until the storm hit it and it looks very nice now except it is small because it basically had to regrow all the leaves and half the vines over again. This pumpkin should go heavy to the charts. It's brother was 20% heavy. I crossed it will the 1161 Rodonis so it should have some good, heavy genetics in those seeds. The first two pictures are of the 1161 Rodonis and the second two are of the 1236 Harp. The Harp is much bigger but four days older. 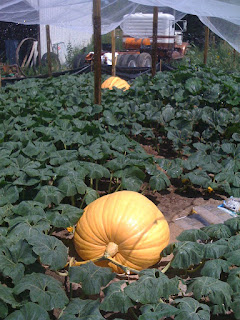 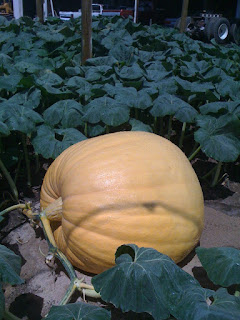 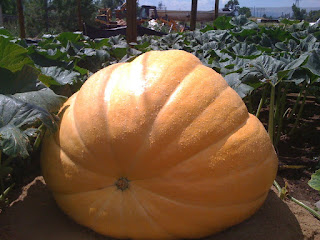 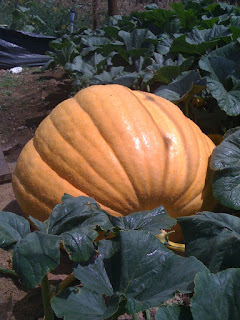 My wife was griping today about a lack of pumpkin pictures. Usually she gripes about me going to the patch but today she gave me my camera and sent me over the fence to take some snap shots. These will be my last pictures until the patch tour.