Yesterday was the Rocky Mountain Giant Vegetable Growers patch tour. Translation: my opportunity to not only talk about pumpkins without someone rolling their eyes, but it is actually encouraged.

Swen Has got a Big One 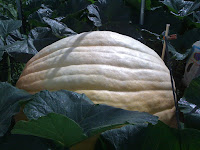 Once again Joe has got one of the biggest pumpkins in Colorado. His 1421 is a giant by Colorado standards and looks to go heavy. Joe was quiet on the exact measurements for the most part but it looked to be about 681 pounds. Good going Joe. You deserve it after last season's troubles and the tough start this year.
Johnson Patch Diversion 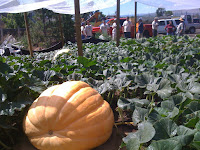 The RMGVG made an unplanned stop at my patch yesterday. I live just a couple of miles from Joe and it was suggested that the group stop by and it was fun having everyone over. Eyeballing it, it looks like my pumpkin is the 2nd or 3rd largest by size but, as I'll talk about shortly, size isn't everything.
I remember my first patch tour. I think I learned about as much that day as I did most of the rest of the season about what it takes to grow a big pumpkin by seeing other grower's patches. I still have lots to learn but it was nice to have the opportunity to share what I have done with some of the other newer growers.
Biz Part II 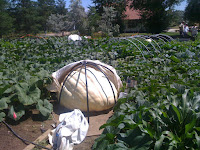 The Biz's 1019 is a beast again this year. About the exact same size at this point as the state champ pumpkin from last year but this thing looks even gnarlier. I would be surprised if it didn't beat out his 10% heavy pumpkin from last year on going over the chart. This is a pumpkin to be reckoned with.
The Wiz
The Wiz was down playing his pumpkins but I think he has two pumpkins that could potentially get up into the 3rd place position by the end of the season. He has a beautiful pumpkin growing at his house that is looking to be a Howard Dill Award winner and it is putting on size quickly.
I don't see my pumpkins keeping up with Joe's or Biz's. I'm not seeing the gains that I should be getting right now and unless things change I'll be left behind. Pete's got a pumpkin that is coming on strong too and the MadMan Mark will definitely be bringing a big one to the weigh-off as he does every year.
I got some secret sauce from Pete yesterday that could make a minor difference. I actually got it more for the lawn then for the pumpkins but it won't hurt the pumpkins so it is worth a try.
I also got a recommendation from the Biz and Wiz to water more which I'm going to try this week. I've always felt like my gains should have been a bit more then they were so I'm trying to switch things up a little to see what results I get. I'm now going to water 6 days a week rather than 4 and I'm going to increase my overall watering for the week by 40 minutes and see how the pumpkins react. If things don't improve then I'll switch back.
Posted by Jamie at 8/08/2010 08:32:00 AM

The patch tour was fun! The pumpkins are looking good!

I've always enjoyed the patch tour too. The RMGVG is a great bunch of guys and gals.