Pics from the Patch 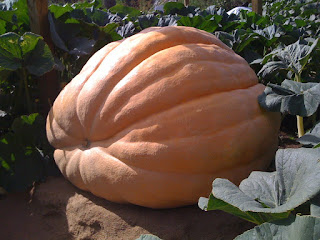 The picture to the right is the 1236. I can't believe how gnarly this thing has started to become since the patch tour. Got a couple of deep ribs that I'm nail biting on now. Outside of some mis-measurements it has been a very consistent grower up until the last couple of days. For some reason it found a new gear lately and it has actually started to slightly increase in gains lately. It is probably the extra watering and fertilizing I've been doing (i.e. grower has finally gotten out of the way of the plants genetic potential--thanks for the tips Wiz, Biz and Thad) because the weather has been very inconsistent and not very good on average.

The 1161 has also been a fairly consistent grower but in the last two weeks has made slight gains on the 1236. It use to regularly be 16 inches behind the 1236 and now it is 10 inches behind and like I said before the 1236 hasn't slowed down. This plant has some challenges though. The stump rot has slowed down but hasn't gone away. The pumpkin is also growing into the vine before and after the stem now and that could eventually cause it to split. At one time I had the pumpkin set on a nice point so this wouldn't happen but apparently the point moved and is now 1 foot away from where the stem is located. Another stupid grower error. I'm going to have to get my weight lifter buddy Jeff over again to see if he can move it 1/2 inch.
Posted by Jamie at 8/17/2010 10:18:00 AM

I have a hole in one of my pumpkins. I know it is not totally uncommon but do you have any suggestions on what to patch it with. Thanks

Sorry to hear that. If the hole goes all the way into the cavity then usually the pumpkin will starts rotting pretty quickly. I dented my pumpkins pretty good and what I did is bleached the area with a 50% dilution, did everything I could to keep it dry and put sulfur dusting powder on it. That did the trick for me. I've heard of growers siliconing the area but I've never tried that.

The Biz's pumpkin is going to go heavy like last year. Not sure I can keep up with the champ.