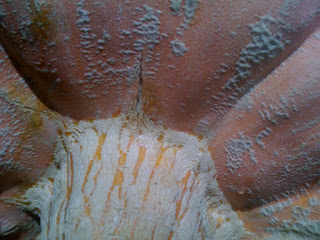 The 1236 gave me a little startle yesterday as a crack showed up just above thestem. Any pumpkin that has a hole that goes into the cavity is disqualified as damaged. The split right now is very small and is probably a growing pain but I will be keeping it dry to make sure the pumpkin holds together.
The 1236 continues to grow slowly and the 1161 is still putting on the pounds. At this point I think the 1161 will weigh more than the 1236 but I will probably take the 1236 to the Jared's weigh-off because of the split and because the 1161 is still growing fairly well.
The 1161 has has had a weird trait that I haven't ever seen on any other plant before. All of the leaves after the pumpkin are very small and it has been that way all season. It isn't untypical for leaves to be just a touch smaller after the pumpkin but these ones are uniformally 1/2 the size of a regular leaf from the stem on. It's clear that the pumpkin is a sink and is sucking all the nutrients to it. Joe Scherber suggested it might be because the cavity in this pumpkin is the size of a baseball. I'm not sure that is the case but I know the cavity will be small. Just hope that means big heavy on the scales.
Posted by Jamie at 9/16/2010 08:01:00 AM

Can't wait to see it at Jared's!