Here is the latest picture from the pumpkin patch.  Right now the pumpkin is 14 days old (under the chair in the photo) and putting on a consistent 4 inches per day.  As you can see in the picture the leaves are flagging some after the pumpkin.  That is because the root system after the pumpkin hasn't gotten big enough yet to support the leaves and also the pumpkin is growing fast enough now that it is is sucking a lot of energy so the leaves aren't getting as much energy.  The vines on this plant are still growing 8 inches a day but they should start slowing down in about a week.  By then the area on the left hand side of the photo will be complete filled in and I'll terminate the vines.  On the right hand side I have plenty of space because the 1789 plant is gone so I'll let some of those vines grow as much as 10 feet more and a couple of the vines I'll let grow until the end of the season so I can have young leaves and roots in September. 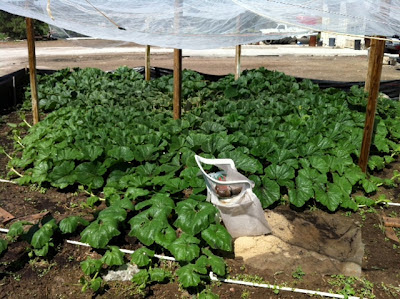