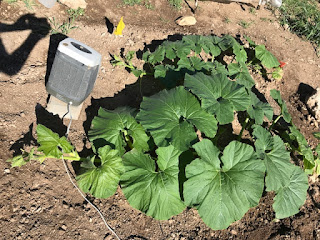 I took off the hoop house on my 747 Johnson pumpkin plant because I needed to re-position it to give the plant as much space as possible.  I'm getting near to the end of the hoop house but I really need to keep that plant in the hoop house until Monday.  Not sure if that is going to work our or not.   Lows in Midway will be in the high 30s over the next 4 days, so I don't want the plant to be outdoors.

Pictured here is the 747 plant.  The plants always look big in the hoop house and small when you take them out.  I buried the main vine while it was out of the hoop house and put down some myco and beneficial bacteria at each leaf node.  By burying the fines, you'll get roots to come out of the top and bottom of the vine at the leaf nodes and by the end of the season you'll have a root system that is probably twice as large.   Those extra roots translate to a lot of extra pounds on the pumpkin by the end of the year.

I did a mixture of soil from the yard and old compost for burying the vines.   This compost is probably 1-2 years old and it looks more like dirt than compost.  I know it is same to put on the vines because the compost pile has no heat and there are weeds growing on it.   If the compost wasn't completely broken down the heat from the compost could burn the roots.

Following the giant pumpkin growing is fascinating.Do you know if other vegetable vines like squash,cucumbers,or cantaloupe would benefit from burying vines also?
Thanks jv