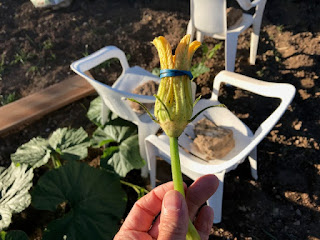 Since I didn't grow last year, it has been some time since I was a giant pumpkin grower.  Today I had my first pollination.  The female flower showed up at 10 feet on the 747 Johnson plant.   This plant is my "better" looking plant of my two plants and has been a descent grower, so the stars aligned for this pollination.

The female flower didn't overly orange up yesterday so I wasn't completely sure if it would open today.   I went to check for male flowers to pollinate with and could only fine one male flower that looked like it might open today and could only fine one (fortunately it only takes one) and I wasn't 100% sure it was going to be ready to open.  The male flowers on my 1685 plants aren't overly big.   Some plants I've had in the past have had monster flowers and it was obvious when they were going to open.   So I was a little nervous if I was going to have any pollen available.  Normally I cut the male flower off the evening before and put it is some water to keep the bees from getting at it and to keep it from getting wet from the irrigation, but this time I kept it on the vine and rubber banded it closed. 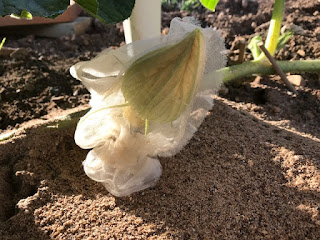 For the female, I put a little mesh sack over it the evening before and I kept the irrigation off in the morning so it doesn't get wet.   The female did open this morning and the male flower was ready to open so everything worked out.  The female was a four lobe, which is what I prefer and seemed pretty symmetrical.

After pollinating, I put the mesh bag back on the female and then put a plastic sack over the flower and watered the plant.

This is the earliest pollination I've ever had.  I'd have to check, but I don't think I've ever pollinated before June 15th before, so we are somewhat a head of schedule.   106 days until picking time! 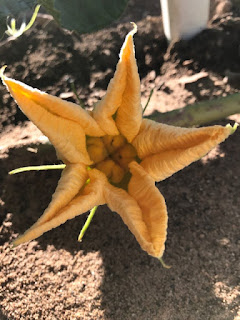 The 747 Johnson is 1985 Miller x 282 Scherber.   The 1985 Miller has grown a number of giant pumpkins including some monsters over 2,000 pounds.  Unfortunately my 1985 did not, but it was my own fault.  My 1985 plant was a fantastic looking plant, but an irrigation problem that went on for more than a week and wasn't caught nearly killed the plant.  The pumpkin stopped/nearly stopped growing.  I got the problem fixed but the damage was done.   Prior to the problems the pumpkin was cranking.  It never fully recovered by kept growing to be a mis-shapened little thing.   I got it to the scale and to my surprise it went 19% heavy.  Now I wonder what could have been.  That pumpkin was only just verily behind in measurements my personal best pumpkin from two years before and that pumpkin went 18% light.   You never know, but maybe it could have ended up over 1,500 pounds, but you never know.

The 282 Shcerber plant is a selfed clone of the plant that grew the world record 2009 pumpkin.  It is probably the greatest pumpkin ever because it broke the one ton barrier and most all of the top 10 biggest pumpkins that have ever been grown have come from this plant. 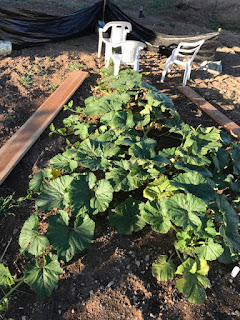 The pollinator that I used on the 747 plant this morning is the 1685 Scherber (800 McMullen x 2145 McMullen).  Remember how I said that almost all of the top 10 biggest pumpkins ever grown came from that 2009 pumpkin?    The other two came from the 2145 and that includes the current world record pumpkin.   The 800 McMullen is an under planted seed that is the reverse cross of the 2145 McMullen (AKA same parents).   So genetically the 1685 is very, very similar in its genetic lines to the 2145.  What I like about this cross is that the genetic lines for the 747 and 1685 are very different, so helpfully I'm bringing two great lines together to make something even better.

Pictured here is the 747 plant.  It would be a very nice looking plant, expect for the wind we have here in Midway has been beating it up something terrible.  Silt fences help, but the leaves are getting thrashed.
Posted by Jamie at 6/08/2017 09:01:00 AM