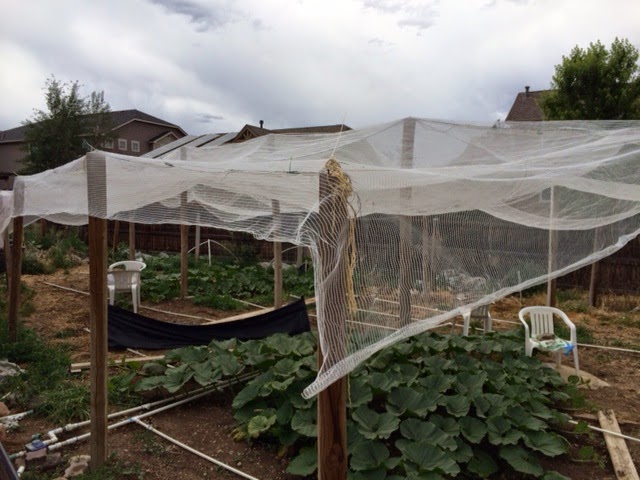 Possibly under the false assumption that we will see sunny days in Colorado again, I put up a 2nd piece of hail netting, on top of the 1st piece this afternoon. I came up with this idea over the winter.  My current hail netting has a 14% shade factor, which undoubtedly helps on the hot Colorado summer days.  However, on the really hot days it isn't quite enough to be ideal.  I learned from Pete's patch a few years ago that these plants don't need a ton of sun.  Pete grew on the east side of his house.  The patch was probably 225 square feet, which is small.  And he pulled a very nice 1306 pound pumpkin out of the patch that year.  After about 1:00 about half of his patch was in the shade.  By 2:00 most all of the patch was in the shade.  You would think that would be a problem but our big temperature swings from high 50s at night low 90s during the day seem to be a bigger problem.  Since his pumpkin was in the shade during the hottest part of the day I theorize that his pumpkin was able to grow more during the day because it didn't have to deal with as big of temperature changes during the day.

Putting that theory to the test, on only the west side of the patch, I've added an 18% shade cloth.  I'm not sure if in this case if 14% + 18% actually equals 32% shade, but for sure the plant won't have to deal with as much brutal sun after the lunch hour.  We will see if that works.

That is, if, we ever have a full sun day in Colorado again.  Its been a very screwy spring and early summer this year.  88 degrees right now but completely cloudy this afternoon like it has been every afternoon for the last month.

However, if there is one truth to Colorado weather, if you don't like it, just wait an hour and it will change.