My patch was low in nitrogen at the beginning on the season so I gave the plants a little boost with about two teaspoons of cotton seed meal around the stump area. Cotton seed meal is an organic slow release fertilizer that is a good source of nitrogen. It is also good for lowering ph and my patch could use some help in that respect.

The rest of the patch got 3 pounds of blood meal. Blood meal is a fast release organic fertilizer and that fertilizer will feed the plant as the roots and vines go out.
Posted by Jamie at 5/28/2009 09:10:00 AM No comments:

The plants have been growing like weeds the last two days. Sunday evening when I was closing up the hoop houses The 1154 Doucet leaves where about an inch away from the 1350 Starr leaves. In the morning at 10:00am the leaves were overlapping. It is fun watching these things get going. They were a bit behind but if they keep this pace then we should be back in the game by the end of the week.

The sad part is that I had to make a decision again. With the plants growing together it was time to decide which plant to grow. I decided to pull the 1154. Good looking plant with some very interesting genetics (world record 1689 crossed with the fourth biggest pumpkin ever grown 1566) but it is an unproven seed at this point so the 1350 got the nod. I potted the 1154 and will be giving it to a friend from church who will hopfully get a big pumpkin from it.
Posted by Jamie at 5/26/2009 10:14:00 AM No comments:

The Great Thing About Hoop Houses 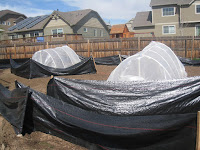 The last few days have been relatively cool in Denver. 60s and 70s for the most part and more of the same for the next few days. The great thing about growing a pumpkin in a hoop house is lower temperatures really don't matter. It is 11:00 right now and it is a perfect 84 degrees in my hoop house with an outside temperature of 66 degrees. Windy days are also not a problem for plants growing in hoop houses. The wind goes sailing by with just a gentle breeze coming through the hoop house. Colorado growers have talked about the challenges of growing in our enviroment for years. I believe the three main things that cause us trouble is lack of humidity, big and quick temperature changes, hail storms and high UV light. The hoop house kind of evens things out in many ways. In my hoop house, with a 75 watt bulb in it at nigth (with the light shielded from the plant), the temperature usually doesn't get lower than 53 degrees at night, the humidity is higher because the plastic holds the moisture in, the plastic cover protects the plants from smaller hail and I would believe at least some UV rays would be filtered out by the plastic. The biggest challenge with hoop houses is not letting it get to hot. On a cloudy day where the sun breaks through the clouds the temperature can easily rise 10 degrees in 15 minutes. In an hour or so the temperature in the hoop house can easily get over 100 degrees. I have a wireless thermometer in my hoop house and I work from home so I can easily watch the temperature all day and modify how much I open the hoop house to control the temperature.

Update (2:00pm): Pea sized hail just hit and the hoop houses held strong so no damage to the plants at all. At least one item on my least has held true to this point. Almost a year ago my plant got hit by hail and I lost about a foot of the main vine. Mitigating risk is a big part of growing big pumpkins.
Posted by Jamie at 5/24/2009 11:07:00 AM No comments:

Photos from the Patch

The following are the latest pics from the pumpkin patch. Gave them some nitrogen today so hopefully the next group of pictures will show a burst of growth. 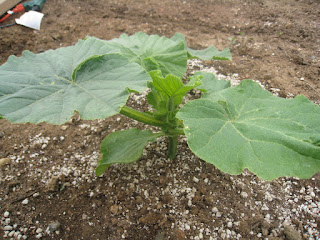 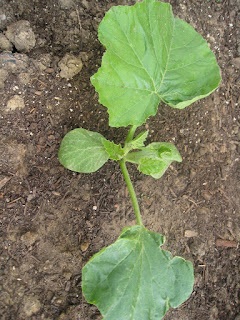 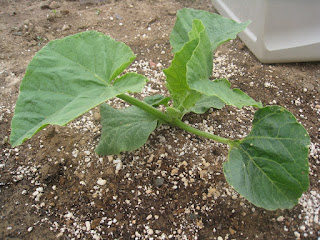 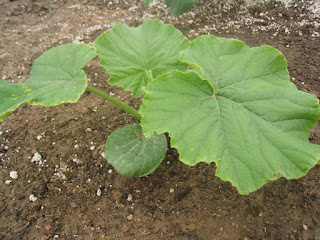 Main Vines are Getting Ready To Run

This time of year can be kind of boring in regards to pumpkin growing. Thad Starr said it well in an email last week when he said, "I hate this time of the year. You wait and anticipate it all winter, finally get to start your seeds, then schreeeech! Wait and wait for the little bastards to grow. They are so slow to start!" The 1566 contines to do fairly well. The 1350 had very little growth for about a week so I planted a back plant next to it and it got the message. In the last two days it grew two new leaves and there are signs of life in the plant again.

The warm weather is really starting to help the growth too. I've been giving the plants a little extra water as well to help them along.
Posted by Jamie at 5/18/2009 08:49:00 PM No comments:

So you've decided to go after it this year. To grow a really big pumpkin. Congratulations! Growing pumpkins can be a lot of fun and a great family activity. Below are some links to previous posts I have made about pumpkin growing. Feel free to browse through them and maybe you can find something that will help you in your quest of the Great Pumpkin. If you are looking for really good seeds please visit http://www.coloradopumpkins.com/.

The following are pictures of the pumpkin plants in their hoop houses. The 1566 Rodonis was planted 4 days before the 1350 Starr and 793 Van Hook (which the kids are growing) but both of them have been a little slower getting going. 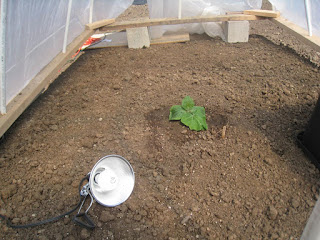 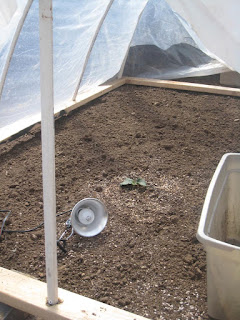 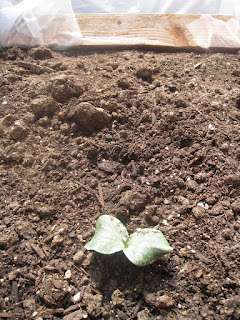 Of the nine seeds I planted only one didn't germinate and that was the 1450 Wallace. Two other plants germinated but don't look like they are going to make it and they are the 1269 Hunt and 1363 Werner. Of all the plants the 1566 Rodonis is doing the best right now. Really rapid growth. It is followed by the 1350 Starr which had a bit of a slow start and is now the second biggest plant and the 793 Van Hook. The 1154 Doucet, 1004 Mohr and 1187 Hunt are also growing and look to do well. I only have two full-size spots and one small spot to grow on. My two children will grow on the smaller spot. My wife will belittle all of us during the process (we call her the pumpkin widow). The plants will be planted outdoors in the hoop houses late tomorrow afternoon. It looks like the 1566 Rodonis, 1350 Starr will go into my patch and the 793 Van Hook will be grown by the kids. If you are interested in the three extra plants please let me know. They all have fantastic genetics and I would hate for them not to be grown. I have had a couple of people already ask me for plants but right now expect to have one extra.

From what I have been able to find only two 793s have been grown so far and only one was a real attempt. The 793 Van Hook is 1041 McKie x 1450 Wallace. The 1041 grew the second biggest pumpkin of all-time and is well known for going really heavy. The 1450 Wallace grew the 5th biggest pumpkin of all time and tends to go heavy as well. The 793's progeny have had a nice orange color which I think the kids will really like.

The 1566 Rodonis had an amazing first year with 11 pumpkins over 1,000 pounds. In my opinion it is one of the top 5 seeds right now. The 1566 grew the largest damage pumpkin last year and is one of the 5 biggest pumpkins ever grown. It sometimes throws a great orange color. From growers I have spoken to that grew the 1566 last year they all said it was a great trouble free plant that tends to have lots of female blossoms and great late season pumpkin growth.

The 1350 Starr grew the 2nd biggest pumpkin last year and the 10th biggest pumpkin of all-time. The 1350 grows a nice smooth pumpkin and tends to have an amazing root system. It generally throws a lighter orange color.
Posted by Jamie at 5/03/2009 11:24:00 AM No comments: