The Pumpkin Plants are Growing Nicely 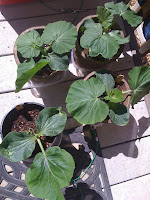 Today I took the pumpkin plants out for their first direct sun of the season. It was the first day in a while that it hasn't been too windy or too cold or that we even had some consistent sun. The plants seemed to like it. In past years the leaves tended to droop after a little while when the plants got their first direct sun light because they weren't used to the intensity. This year I added some additional wattage to the grow "closet" and that seems to have helped. (note to DEA: the glow from the closet is not illicit. Please don't kick the door down.)
Posted by Jamie at 4/27/2011 04:29:00 PM No comments:

Welcome to the redesigned denverpumpkins.com. Tell me what you think of the new design!

Would you like to take a shot at having the biggest jack-o-lantern on your street or maybe a world record pumpkin? I've got some of the best genetic seeds in the world for you. Order now to grow a giant! It is a great activity to do with your children or to show the neighbors who is the best gardener in the neighborhood. Each seed are the same type of seeds that competitive giant pumpkin growers use and have world record genetics. Shop giant pumpkin seeds 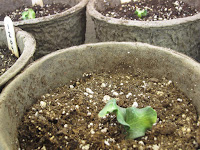 Every seed germinated and it is pumpkin plant growing time. My experience is that for the first few days after the plant pops out of the seed starting mix the plants grow really fast and then they slow down for a bit and then take off again later. The seeds that I've planted are two 1204 Scherbers, two 1306 Mohrs, a 868 Johnson and a 1325 Sperry. My kids will probably grow one of the later two plants. They did a great job of choosing their seeds, preparing the seed starting mix, filing their seeds and soaking them. They decided not to use the paper towel method to get their seeds started but I suspect the seed will be popping out the soil any day now.

I checked the seeds that I started and three of the four of them have germinated so I have transferred them to their peat pots. The 1306 looks to be aggressive plants. Both of those seeds had roots that were already an inch long. One of the 1204 Scherber seeds hasn't germinated yet so I decided to start a 1325 Sperry as a backup. I like the 1325 genetics. It is a cross of a 1161 Rodonis (same seed that grew the world record 1,810) and a 1725 Harp. The 1725 is a seed from the former world record pumpkin. Steve Sperry said that the 1725 was "the fastest growing, best looking plant in the garden" until it had a blossom end split in late August. It is impressive that the 1725 was the best looking plant when the biggest pumpkin that he took to the scale last year was 1520 pounds. I figure it is a seed worth growing.
Posted by Jamie at 4/16/2011 01:27:00 PM No comments: 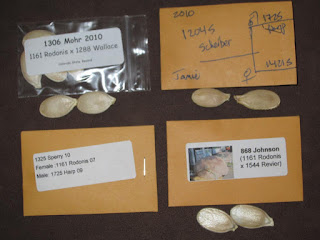 Tonight I sanded the edges of my pumpkin seeds and I am soaking them now in warm water with a drop of seaweed and a little humic acid to help them germinate. After an three hours of soaking I will transfer the seeds to lightly moistened paper towels that will be folded around the seeds and put into Ziploc bags. The Ziploc bags will then be placed at the back part of my computer where it is usually about 85 degrees. An ideal temperature for pumpkin seed starting is between 85 to 90 degrees. In 24 to 48 hours a little root will come out of the bottom of the seed and at that time I will transfer the seeds to my seed starting mixture in peat pots.

For my seed starting mixture I use 80% ProMix BX, about 20% earthworm castings, some myco, and this year I'm going to add a little BiotaMax to the pots. BiotaMax is a combination of friendly bacteria and fungus that will help protect and feed the pumpkin plants. About 48 hours after putting the seeds in the pots they will start popping through the soil. I have the pots in a closet with grow lights and a space heater so I can keep the plants at about 85 degrees. About two weeks later I'll be taking the plants outdoors.

The seeds I am growing this year are the 1204 Scherber (1421 Stelts x 1725 Harp) and the 1306 Mohr (1161 Rodonis x 1288 Wallace). The weight of the pumpkin that the seed came from is the number and the name following is the last name of the grower that grew the pumpkin. The numbers in brakets after it are the female and male pollinator for the seed. Both of these seeds came from Colorado growers. The 1725 Harp pollinator for the 1204 Scherber is a seed from the former world record pumpkin. The 1161 Rodonis in the 1306 Mohr is a seed from the same pumpkin that grew the world record 1,810 pound pumpkin so there are some great genetics in these seeds.
We are off to the races! Hopefully we will be reporting giant pumpkins from these seeds come September.
Posted by Jamie at 4/14/2011 06:30:00 PM No comments: 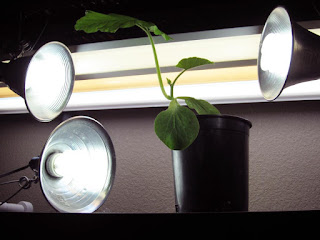