For those that are new to this giant pumpkin blog and looking for tips on how to grow a giant pumpkin this blog covers everything that I do to grow a big pumpkin.  In this blog you will find tips and advice to grow pumpkins to a massive size.  You can also get many of the same pumpkin growing products that I use to grow a nearly 1,000 pound pumpkin.  Please feel free to add a comment to any post if you have any questions and I'll reply to the same comment field on the site.
Posted by Jamie at 4/24/2012 11:08:00 AM No comments: 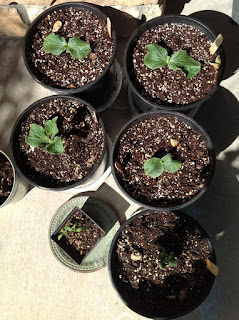 I was recently asked what I am going to name my pumpkins this year.  My grandfather was a very good gardener.  He taught my dad a lot about growing and then he taught me.  Grandpa could grow carrots there were as thick as your wrist.  He passed a way a number of years ago so one of the pumpkins I want to name after him.  "Elbert."  That is about as good of a pumpkin name as I can think of.

The other pumpkin I'm going to name after my mother-in-law, Christine.  She has always been one of my top three biggest supporters when it comes to pumpkin growing so I thought I would name the other one after her.  It will be more than two months until we start growing pumpkins so all of this seems like a long ways away right now, but hopefully Christine or Elbert will do their namesakes proud.
Posted by Jamie at 4/23/2012 04:53:00 PM No comments:

Today I tilled the planting area in the pumpkin patch.  I'll till the rest of the patch in about a month so I can let the cover crop grow a little more, keep down the weeds and keep the ground from getting compacted.  I amended the soil with compost, magnesium and a touch of blood meal.  In just over two weeks I'll be putting the plants in the ground.  Later this week I'll cover the planting area with some clear plastic to help warm up the soil a little, but right now the forecast is for 80s in Denver next week so it won't be too much trouble to get the soil warmed up to where I want it to be this Spring. 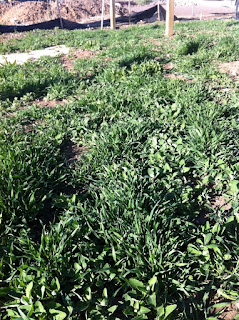 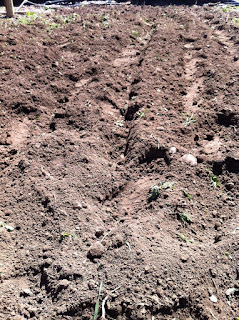 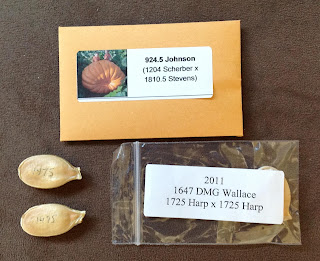 I like the 1475 Scherber because the estimated weight put it as the biggest pumpkin by far ever grown in Colorado.  The plant was beast.  Like nothing else I've ever seen.  Joe told me the day that he pollinated that pumpkin that is the pollination would take that nobody else could catch him and I believed him when he said it.  The pollinator was a clone of the 1161 Rodonis that grew the 1725 Sweet pumpkin.  You could see in the clone plant how that plant was just made to grow.  Even on a patch of soil that was less than desirable it produce a respectable pumpkin.

I like the 1647 Wallace because in my mind it has the highest likelihood of producing consistent offspring because it is a sibling cross.  In other words the mother was crossed with another plant whose seed came from the same pumpkin.  Genetically speaking sib crosses tend to produce genetics that are more similar to the original plant genetics.  They aren't the same, but the next best thing.  The pollinator in this cross had an estimated weight of 1789 pounds when the pumpkin went down to a split in August.  It still had another month to grow and could have broken the world record by a lot.  The mother in the cross went 11% heavy to the charts.  In my mind this is the ideal cross.

My 924 Johnson I think has some very good potential.  Not only were the mother and father good looking pumpkins their genetic backgrounds on both sides are fantastic.  I know of a number of people that are planning on planting this seed and I think someone will grow a very nice pumpkin from it.
Posted by Jamie at 4/18/2012 01:27:00 PM 5 comments:

The Children Have Got off to a Great Start for their Pumpkin Season! 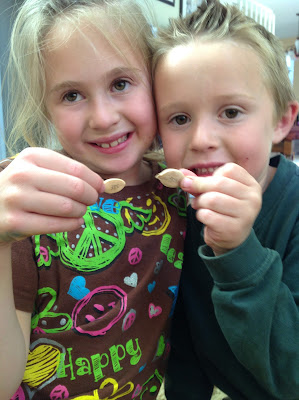 My children are giant pumpkin growers (I can just see my wife rolling her eyes now as she reads this post).  This year they seem more excited about it than in past  years to grow a giant pumpkin.  My daughter this year is particularly interested in growing a bigger pumpkin and I think she will do it.  They are growing one of my 924 Johnson seeds along with a 335 Scherber.  The 335 is a cross of a clone plant that grew a 1,725 pound pumpkin crossed with a clone plant that grew a 1663 pound pumpkin.  On paper this seed has a lot of genetic potential.

This year the children did all of the work from putting their soil mixture together (my son didn't seem very excited to dig into the earthworm castings to get some quality poop to add to his pot but eventually he got right into it), soaking the seeds and putting the seed in the soil.   I'm really hoping they will get over 200 pounds this year. If they work hard I'm sure they can do it.

Cover Crop is Coming Up Nicley 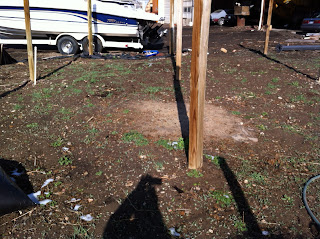 I mentioned previously that I added a cover crop a couple of weeks ago to the pumpkin patch.  Unusually warm and dry March weather in Denver made it possible to sow some seeds in the pumpkin patch and getting it going.  In another few weeks I'll amend and till the cover crop into the soil making a nice green manure for the soil.
Posted by Jamie at 4/04/2012 09:47:00 AM No comments: