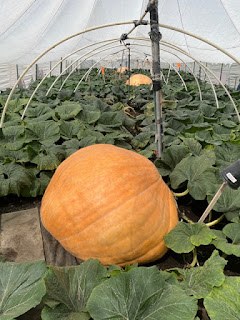 I went to the Utah Giant Pumpkin Growers patch tour yesterday.  Some inspiring patches to see.  All of them could be learned from.  Two of the last stops on the tour had some truly amazing pumpkins growing in them.  The first had three giants going.  The biggest estimated around 1,500 pounds and has been putting on as much at 60lbs per day.  The second has a pumpkin that is about 2 1/2 weeks older and was estimated at about 1,600 pounds.  To still be in July and see pumpkins with another 50 days to grow and  at those sizes is awe inspiring to see.  One ton pumpkins could be possible for both if they can keep those pumpkins together.

My takeaway from the tour is I need to feed the plant more.  I have been doing about half the potassium that the grower with the pumpkin doing 60lbs per day has been doing.  I've always struggled with how much to feed the plants.  My new strategy is the eyeball test.  Spoon feed them high amounts until something seems a little off and then start backing off.  I know a lot of growers who do testing of the fertilizer solution until it gets tot he right PPM.  That isn't a bad strategy, but with the eyeball test you can take the plant right up to the edge of what it can optimally handle and then leave it there. You don't necessarily get that with PPM testing. 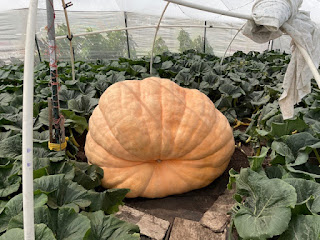 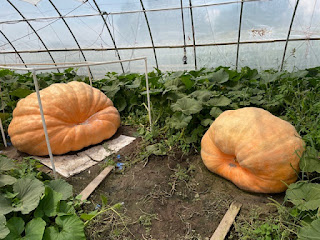