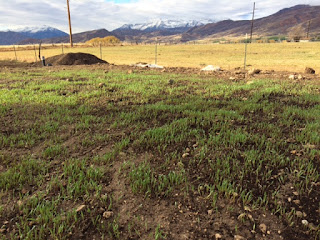 Friday of last week, I put down winter rye seed for a cover crop.  Look how well it is doing already.  Warmer than average temperatures hasn't hurt, but good management practices is the key.  Night time lows have been between 31-38 degrees for the last week, but winter rye doesn't mind that much.  It is pretty hardy, so as long as you can keep it wet and you don't have a hard freeze, it will germinate.  A trick that Joe Scherber taught me is putting clear plastic over the planting area to get it to warm up a little more.  It also helps keep the moisture in, which makes a big difference.  Pre-germinating indoors in a bucket of sand with a little kelp and humic acid also helps ensure a higher germination rate.  These grass blades are already about 2 inches high, which is pretty amazing a week after sowing the seed.

In the spring, that grass will take off when it gets warm and grow like crazy.  I'll till it into the soil as a green manure to increase the organic matter in the soil and then I'll plant another cover crop of winter rye in the patch, except for the planting areas, at that time to help suppress weeds, keep the soil from getting compacted, help get the biology going in the soil and add additional organic matter.  When the pumpkin starts to vine out, I'll till in that 2nd cover crop well in advance so that it will be broke down in the soil by the time the roots and vines get out that far.

I really like winter rye because it establishes well in the fall and it is easy to get rid off when it is time to till it in.  You can fairly easily just pull it out of the soil in your hand, which is great, because you don't want to have to fight it off like a weed after establishing it.

Limestone Soil in the Pumpkin Patch

Back in March, before our new home was built I got a soil test.  The soil was high in potassium and surprisingly high in calcium and organic matter.  I believe my property some years ago was a farmers field, so I could account for a 5.3% OM, but I was surprised by the high calcium reading.  The last two weeks I started working on the front yard landscaping and there were a lot more of the pot rock in the backyard.  I figured this rock to be limestone, but I wasn't sure until I found this yesterday.

We Have a Pumpkin Patch in Utah! 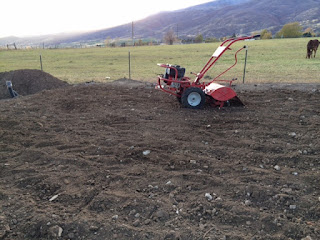 It has been over a year since I could say I had a pumpkin patch.  With the move, I didn't grow last season and it was a little sad to see my neighbor cover the old patch with piles of dirt.   Yesterday evening I tilled about 3 yards of compost into the new patch along with some nitrogen, sulfur, humic acid, peat moss, manganese and iron.  Last night I also took a bucket full of sand and put in a little humic acid and liquid seaweed with some winter rye grass seed and wetted it to help pre-germinate the seed.  I then put that seed down at lunch today when things warmed up and racked it into the soil and then gave it a good watering.  I'll then cover the patch with plastic to help warm it up and which will increase the germination rate. 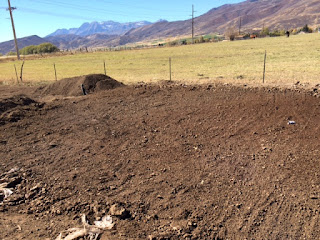 Weather here in Utah lately has been relatively warm.  Early mornings lately have hovered right around 32 degrees, but day time temperatures are forecast in the 60s and low 70s for the next week, which will be ideal for getting that cover crop going before the first hard freeze.  That winter rye cover crop will be tilled into the soil in the spring which will add organic matter and nutrients that will be available to the pumpkin patch next year.
Posted by Jamie at 10/21/2016 01:56:00 PM No comments:

Compost for the New Pumpkin Patch, Dump Trailers & A Big Thanks 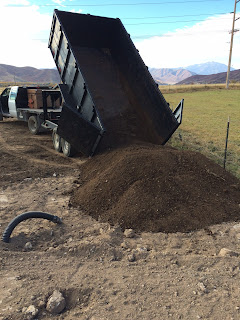 Today I got about 20 yards of compost for the pumpkin patch and new yard.  This house is a brand new build, so I tilled the entire front yard to get the soil loosened up because it was very compacted from all of the heavy machinery.  My new 8hp Troy-Bilt tiller worked great.  The compacted soil was hard to work, but after few passed it started to dig deep.  It will work very nicely in the patch.  Not as powerful as the Barreto tillers I've been using, but in loose soil it will till the patch faster.

A big thanks to everyone at Power Equipment Rentals in Heber City, Utah.  They hooked me up with a dump trailer, truck to haul the dump trailer and a front loader to load up the compost.   They also gave me some very nice finished compost that looked to be 2-3 years old.  My soil at the new place is relatively nutrient rich, so this fully finished compost will be a very nice amendment to the pumpkin patch to get the organic matter increased in my sandy loam soil.
Posted by Jamie at 10/15/2016 09:16:00 PM No comments: 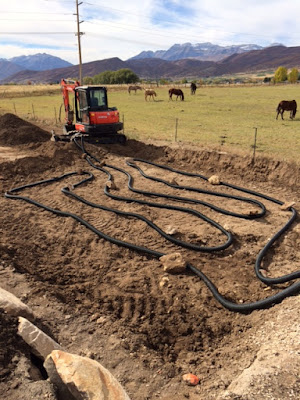 Now I wouldn't purport to be an expert on setting up a geo thermal heating and cooling system in a greenhouse, but after watching a number of videos, reading blog posts and talking with some people I feel like a know enough to do what I want to accomplish.  What is a geo thermal heating and cooling system?  Basically it is a way to use the earth to heat and cool air in order to heat and cool a greenhouse or some other space.  Living in Midway, Utah now, I have challenges with temperatures that come with living in a mountain valley at 5,600 feet.  I'm actually only about 200 feet higher than where I was at in Denver, but the average day time temperature is about 5 degrees cooler during the day and night and that makes a big difference, particularly with giant pumpkins.  45-55 degree nights is not ideal for packing on the pounds.  It makes for nice sleeping however.

So what I have to do is make the pumpkin plants think they are in Napa Valley, Ohio or Rhode Island.  The greenhouse I will build will help with that.  That will help warm the plants up more quickly in the early morning and will get the humidity up a little.  It doesn't do much to keep the plants warm at night however.

The corrugated pipe that you see in the picture below were buried about 2 1/2 feet down in the ground.  One one end of the pipes will have a tube that will go up to the top of the green house and it will have an inline fan hooked to a thermostat that will blow the hot air down into the tubes at a high enough volume to circulate the air volume in the greenhouse.  When the air goes down into the ground it will warm the soil, which is great for the roots and will get the biology in the soil going.  In return the air will be cooled by the earth as it passes through the pipes and then will be blown into the greenhouse, cooling the air in the greenhouse.  In all of my research, this is the most efficient way to heat and cool a greenhouse.  If it were up to me I'd heat the greenhouse at night with a propane heater (i.e.expensive), but my wife is mean and won't let me.  Lol

I also mention that this system will also heat the greenhouse.   Another thermostat will kick on during the night, when it gets too cool and the reverse will happen.  Cooler air will be blown into the pipes and will be heated up by the earth, that has stored the heat from the heat of the day and on the other end, warmer air will be blown out.

I've also purchased an number of soon to be black water barrels that will be on the southwest side of the greenhouse.  Those will soak up heat during the day and then at night will release the heat into the greenhouse.  The guy I bought the barrels from, who has a greenhouse, said he has checked the temperature of the water in the barrels during the day and 85 degrees is pretty common for him.

All of this together I hope will make for some giant pumpkins in 2017.

Congrats to Mathias Willemijns of Belgium on his new World Record giant pumpkin weighing in at an amazing 2,624 pounds.  The pumpkin was grown on the 2145 McMullen seed and went 21% heavy.  One of the seeds I plan on growing next year is the 1685 Scherber which is the 800 McMullen (reverse cross of the 2145) crossed with the 2145 McMullen.  Five of the top 20 pumpkins grown this year where grown on the 2145 McMullen seed, so there is a lot of great genetics.  The 1685 Scherber smashed the previous Colorado state record by over 200 pounds so it is an intriguing seed. 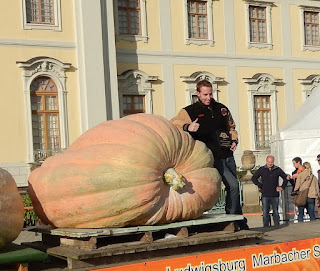