Growth on the pumpkin this last week was about half of the previous week.  Not sure if it was because of the cool weather if it is the new growth trend.  I continue with the fertigation.  Each time I mix it up a little.  This last changeover I did nitrogen and potassium.   Before that I did 7-3-4.   I like to go a little lower on the phosphorous.  Vine growth has picked up a little on the plant the last two weeks, so the extra nitrogen seems to be working.  With 45 days remaining until vine cutting, I need to average 7.5 pounds a day to get where I would call the season a success.  Problem is that last week we weren't averaging much more than that.  The weather is cool again this week, so I'm not sure I'll see much of a change in the growth pattern.  Really wish I had the greenhouse up right now.

I like the shape of this pumpkin.  Barrel shaped is perfect.  The 2145 tends to go heavy, so I'm hoping we go that direction, but I've been burned by that thinking before.  This is a picture from last week. 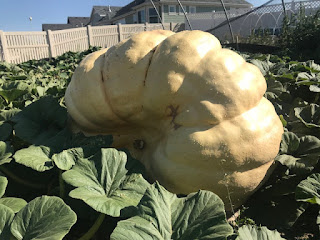 Mitigating Risk in the Pumpkin Patch Late in the Season

So you've got a big pumpkin growing and you are going into the close of the season.  What do you do now?   To get your pumpkin to the scale is no small feat.  Almost half of the pumpkins I've grown didn't make it to the scale or made it to the scale damaged.   There are some things you can do to help increase your changes that you end the season strong. 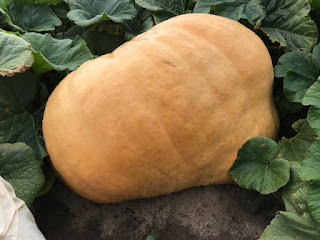 The pumpkin named after my grandpa whom pasted away on New Year's eve bit the dust this last week.  When I measured it on Thursday I was surprised to see no growth because six days prior it seemed to be growing at a steady rate.   Today I measured again and no growth.  My son's plant next to it seems to have yellow vine disease, but this plant and the pumpkin show no signs of disease or a split.  It happens.

Putting a Rumor to Rest

A first year grower friend of mine went to the UGPG club patch tour this last weekend.  I wish I could have been there, but our annual family reunion happened to fall on that same weekend so I was in Yellowstone.  I texted her from the cabin and asked how things went and if there were any big pumpkins.  She said that the rumors were that I had a 1,300 pounder in my backyard.  Apparently this blog isn't very highly read by all.  Lol

I'll put those rumors to rest.  My effort in the pumpkin patch this year has been minimal.  Too many other distractions, which is disappointing to me.  I think I had some good genetics to grow on this year, but I haven't got out of the plants what I should have because of a lack of time.  I would be the most suprised person if I had anything close to 1,300 pounds.  An outside chance of being able to best last years pumpkins, but I'm not sure that will happen.

I measured the 1974 pumpkin today for the first time in 6 days.  It only showed 1/2 inch in new growth on the circumference.  It may be shutting down.  The plant looks perfectly healthy however, so I'm not sure what is going on.

2145 seems to be growing at the same rate.   Vine growth hasn't been good over the last few weeks.  I hit it with additional nitrogen over the last two weeks, but it didn't seem to make much of a difference.  Pumpkin seems to want to take everything.
Posted by Jamie at 8/16/2018 08:46:00 AM No comments:

Some Grandular Nitrogen for the Plants