It's in the Books; The Pumpkins have Hit the Scales 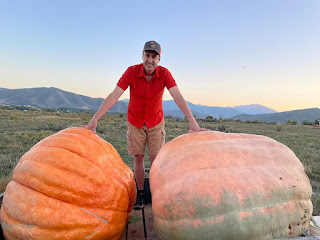 This year was kind of a challenging year for pumpkin growing.  The pumpkin was doing okay until smoke, cold nights and aphid problems just wouldn't let the pumpkin grow the last third of the season.  The pumpkin only put on 40lbs over the last 30 days, which is horrible.  In the end the pumpkin ended up at 902 pounds.

My son on the other hand had a pumpkin that was pretty much the little engine that could.  He got yellow vine disease a little over a month ago and usually the pumpkin stops growing when it takes hold, but that pumpkin kept pushing along.  In the end he ended up with a personal best 674 pound pumpkin that was a very nice orange color.

The big winner on the day was Ross, who set a new Utah State record with two pumpkins over one ton and the biggest at 2,142 pounds.  Just a great accomplishment for a great guy.