Pumpkin Plant Sunbathing to Harden them Off. 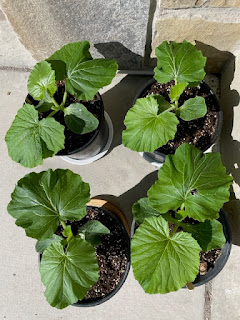 I try to get my pumpkin plants out from under the lights and in the sun as often as I can before I get them into the ground.  Often if the plants don't get use to the bright sun, heat and wind, they get pretty moody when they get planted.  The leaves will fold like closed umbrellas and to a new grower it looks like they are going to die.  As long as you protect them, they typically snap out of it after a little while as the root system grows out into the soil.  Giving them a little extra water and misting them during hot days also helps.

Usually the first time I put my plants under the sun they begin to look a little droopy after an hour or two.  Today I had the plants out in the sun for the first time for about 4 1/2 hours and they were still doing good.  I had to taken them in because the wind was starting to kick up a little.  I would have liked to get the plants under the sun earlier, but snow, wind and cold temps haven't allowed that until today.

Color for all four plants looks good and growth has been good.  I've been pretty much keeping with the put the pedal to the floor theory and giving the plants just a little fertilizer with each watering.  Can't see I've seen anything negative with that so far.

I hope to get the plants into the ground on Monday.

Watermelon seeds germinated but then I lost both of them in the pots.  Probably didn't keep the soil moist enough.  So I've started two 341 Vial seeds on May 28th.   Both seeds were from the 2nd biggest watermelon ever grown in the world.

Soak, Sanded and Sprouted--Yea, We are Growing Again 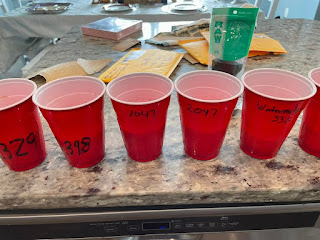 Started the pumpkin and watermelon seeds on April 15th.  All four are germinated now and in their pots.  One of the 2047 seeds looks like it might have clubroot, so I contacted the doctor (Scherber) and he suggested putting a little azos on the root, which I did.  In about 1 1/2 weeks I'll move the plants into their hoop houses outdoors.  For right now they are all in my grow closet, under the grow lights with a little space heater to keep the temperature in the 80s.

One thing you should always do is figure the number of growing days and then make sure your starting date is going to get you at least 90 days of pumpkin growing after pollination.  Depending on which weigh-off the pumpkin goes to, if I pollinate around June 24th, that gives me 92-99 days until the weigh-off.  Must pumpkins will stop between 90-100 days.  I have had a couple grow 105 days before however. Weather, genetics and plant health can become key factors for how many days you can get. 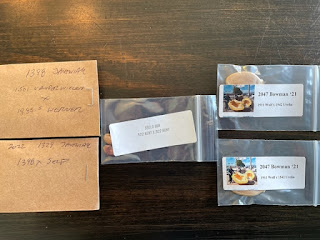 In the pots I use ProMix BX soil-less potting soil along with some beneficial microbes, azos and myco.  I'm going to do something this year that I haven't done in the past.  With each watering, I'm going to put just a very small amount of water soluble fertilizer.  The plan is to tell the plants that there is lots of food available, right from the start, so the plant will beef up and be ready grow.

The Pumpkin Patch is Tilled and Amended 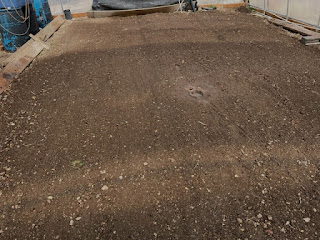 Today I put down some peat moss, a little compost, copper, boron, manganese, iron, elemental sulfur and humic acid as per my soil test recommendations I got results back a week ago.  After that I tilled it all in.
The peat moss is added to help the tilth, CEC, increase moisture/nutrient holding capacity and to create air pockets for the roots.  This loamy soil is looking and feeling very nice right now.

After tilling, I put down some winter rye grass seed on the second half of the greenhouse, which I will till in around the beginning of June when the pumpkin plants vine starts to run.   The rye grass will help to suppress weeds, reduce soil compression and add organic matter back into the soil.

Around April 15th I'll start my seeds.  As mentioned before, I'll be growing the 2047 Bowman, which was the first pumpkin to ever go to a scale in Utah and go over a ton.  The pollinator on that plant was Utah state record pumpkin, so I like the cross.   I'll also be growing a giant watermelon this year also.  The seed I'll be growing produced the 2nd biggest watermelon ever grown in the world this last year.