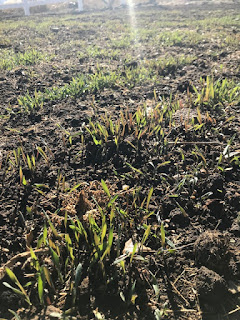 The cover crop I planted 2 1/2 weeks ago is finally taking off.   It started to pop up last Friday.  The day time highs have been relatively warm the last week, but previous to that things were fairly cool so it took some time to get the grass coming up.   The lows have been at or below freezing every night for weeks.

This cover crop will do a few different things for the soil.  It will help prevent erosion and compaction.  It will help keep the biology in the soil going.  It will suppress weeds.  And it will also make a nice green manure that will be tilled back into the soil in the spring adding organic matter to the soil.

What I'll probably do is amend the planting area and till it in the early Spring.  About a 10x10 space.  The rest I'll mow down from time time time to keep it manageable until June, when I'll till the rest in, about the same time that the pumpkin plants are about to grow out of their hoop houses.
Posted by Jamie at 10/24/2017 03:45:00 PM No comments: 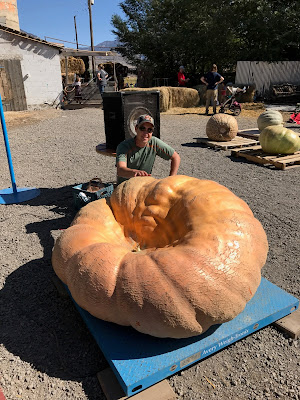 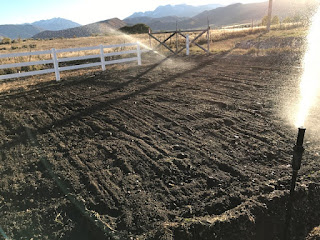 Final Pumpkin of the Season & Patch Prep Has Begun 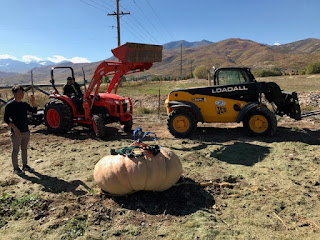 Today I lifted the 1685 pumpkin.  Measurements are bigger than the 747 pumpkin, but we'll have to see if it weighs more.   My guess is that it goes light.

Big thanks to the team at Power Equipment Rental in Heber for the equipment.  Used the telescoping fork to lift the pumpkin and then used the Kubota tractor to put compost into both patches.  When I asked if the had a tiller attachment, they said no and then went out and bought one for me to use.  They even supplied some very nice compost.  So a BIG thanks! 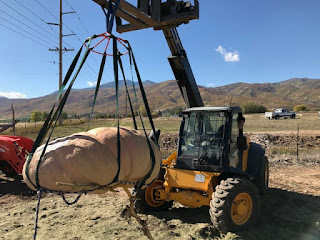 I put down grass clippings from the lawn that I saved all summer, elemental sulfur, yards of compost and some 8-2-1 fertilizer.  That big Kubota made nice work of the soil.   Three swipes in the smaller patch and it was done.   Also used the Kubota to till the entire backyard in preparation for putting in a lawn the spring.

Pumpkins are for Children at Heart 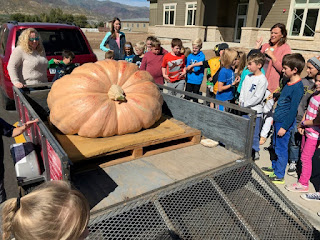 For years we've taken the pumpkins to local schools.  It really makes all of the hard work worthwhile, because anyone who is a child at heart appreciates a giant pumpkin.   The questions and the level and enthusiasm are always the same.  "How much does it way?"  "How to you lift it?"  "How many pumpkin pies can you make?" "What will you do with it?"

Matt McConkie said it well on TV.   I challenge you to see a giant pumpkin and not smile.   One of my favorites is driving the pumpkin around and watching people at the side of the road light up when they see the pumpkin.

To answer the last child's question about what we will do with this pumpkin?  One will be on our driveway for Halloween, so make sure to stop by if you are trick or treating in Midway.  The other pumpkin will be at Signam Signs in Midway.  Both are the biggest pumpkins ever grown in the Heber Valley, so they are kind of fun.
Posted by Jamie at 10/03/2017 03:43:00 PM No comments:

See Ya at Hee Haw Farms Pumpkin Championship on Saturday

The plan is to take the 1685 pumpkin "Cujoe" to the Hee Haw Farms weigh-off this Saturday.  I've never been to this weigh-off before.  I knew it is traditionally much smaller than the Thanksgiving Point weigh-off, but looking forward to attending.   Starts at noon, so come on by.
Posted by Jamie at 10/02/2017 05:25:00 PM No comments: