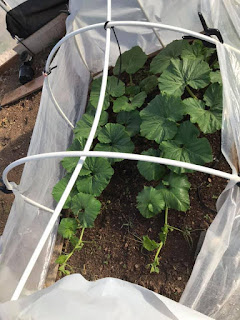 Gave the plants some nitrogen, seaweed, sulfur and humic acid over the last few days.  Buried the main vine and using those nutrients to help support new root growth along the main vine.  I bury the vines with garden soil and then put a little compost on top.

Will be making some decisions for which plant to keep in the next few days.  Both are neck and neck.  Will probably go with the one on the right.

Tilled in the cover crop today so it will be mostly decomposed as the vines grow out to the second half of the patch.