Here is the picture of the pumpkin plants.  The 2145 plant is the larger plant on the lower left.  A 1974 plant is on the lower right. 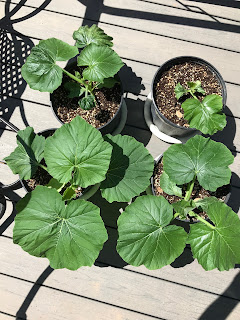 Big Thanks to Ralph Laub

I drove out to Vernal, UT yesterday and got a very nice tour of Ralph Laub's high tunnel and setup.  It was very kind of him to give me a couple of hours of his time to show me not only what he has, but why he has done it the way he has done it.  I know he saved me from some trouble on my geothermal system because of some comments he made.   Ralph was the same person that turned me onto the NRCS high tunnel program and saved me a couple of thousand dollars.  That isn't a small thing, so a big thanks to him.  Wish I would have been smart enough to take some pictures yesterday.

Some Utah growers probably woudn't know it, but Ralph grew the 3rd biggest official pumpkin grown in Utah last year.  He took that pumpkin to another state so I'm not sure most people ever saw it.  The pollinator on that pumpkin was Matt's big one, so some nice genetics in that seed.

Ralph has a nice setup.  A greenhouse that is twice as big as the one I'll be growing in this year with some nice enhancements added to it.  Sounds like Ralph isn't planning on growing this season and instead is going to be doing a pumpkin tour this summer.  I'm sure after that he'll come back with some very nice new ideas for next season.

I ordered my high tunnel today.  Sounds like it could be arriving by the end of next week. 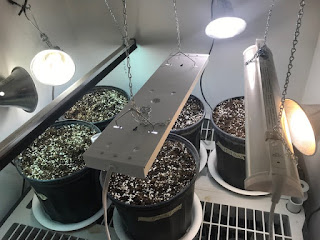 I mentioned last year that in my new home I setup a "grow closet" to start my plants in.  Did it on the cheap.   It consists of some T5 lights, brooders with some full spectrum CFL bulbs, plastic shelving and a smart plug.  Outside of spring, it just stores some pumpkin growing supplies.  But this time of year I put a thermostatically controlled space heater at the bottom of the closet and a bunch of lights to get my plants started.  The space heater is set to 80 degrees.  I have two wireless monitors in the closet right now.  One is sitting on the top of a pot nearer to the lights and the other is sitting on the shelf.  85.4 degrees at the top of the pot and 81.8 degrees at the bottom on the shelf.  Nearly perfect.   As the plants grow the lights will be lifted.  I try to keep the lights 4-5 inches away from the plant.

The smart plug in a new edition.  Got it for $10 on Amazon for Christmas and it works nicely.  I'll use it in the greenhouse also.  With it I can set the lights on a timer.  I can also turn them on and off via an app.

Seeds are Soaking and the Pumpkin Season has Begun 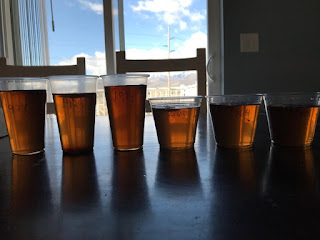 I sanded and have the pumpkin seeds soaking right now.  Two 1764 McConkie, three 1974 McConkie and one 2145 McMullen.   Put a little humic acid and kelp into the water to help with the germination process (no that is not an Amber ale).   Those will soak for about six hours and then will be put the seeds into wet paper towels and a warm place to help complete the germination.  By tomorrow evening I should start seeing some roots.
Posted by Jamie at 4/09/2018 10:58:00 AM No comments:

Finding the Square Footage of Your Pumpkin Patch or Anything Else

In addition to doing my patch prep right now, I'm trying to complete the landscaping for the backyard.  Then very soon I'll be doing the greenhouse.  Three big projects in a two month period.  Not ideal.   But I pretty much have to get it all done.

While trying to figure out how many square feet of landscaping rock I needed for the yard I ran into a problem.  I need a lot of rock, but the areas that will be covered are hard to measure because it mostly isn't simple square areas.  There are lots of different angles.  It then occurred to me that I may be able to find a solution using Google Maps satellite view.  I had used a tool once that would allow you to calculate a distance in feet on the map, so I wondered if there was a tool that allowed you to calculate an area on a map.  Low and behold there was:

This website allows you to pick points for the corners of the area and it then figures out the square footage.  You can do multiple areas which it will then total.  So you can easily look at the satellite view of your pumpkin patch.  Pick the corners of the patch and within about 1/2 foot have an accurate measurement for the pumpkin patch or any other area of any size.  Pretty cool.
Posted by Jamie at 4/08/2018 08:25:00 PM No comments: 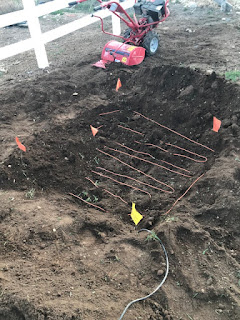 Today I dug out the area for the heating cables in the south patch.  Put them about 8 inches down into the ground and then buried them.  This will be the same area that the hoop house will go in a couple of weeks.

The corner flags will stay there all season.  They help me make sure I don't till them and make it a little easier to dig up the cords in the fall.  The center flag is were I'll be planting the pumpkin plant.

I'm going to start my seeds five days later this year.  The first weigh-off is a week later this season and I felt like I was cutting it too close last season with getting the plants frosted.  Last frost for me is around June 1st.  I was out of the hoop house well before that and had some nights around 38 degrees last year, so better safe than sorry.   I'll still have two more days of growing this year, so I think I'll be in good shape in the weather will cooperate.
Posted by Jamie at 4/04/2018 08:33:00 PM No comments: