Clone of Plant that Grew 2008 Neptune 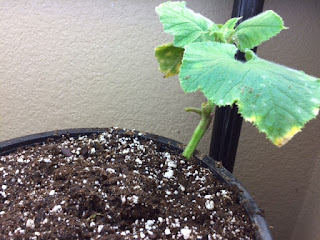 I transplanted the clone cuttings into pots this weekend.  All three of the cuttings rooted, but the plants don't look very healthy right now.  A little powdery mildew has shown up and the leaves don't look very happy right now.  I gave the plants some Eagle which should knock out the powdery mildew.  The next week will be important to see if the plant can root into the potting soil and survive the transplant shock.  I think by next weekend we will know if they will make it.

I gave the plants a little kelp and B-vitamins to help with the transplanting.  Also a touch of RAW Bloom that has mono potassium phosphate which will help some with the rooting.
Posted by Jamie at 10/25/2015 12:01:00 PM No comments: 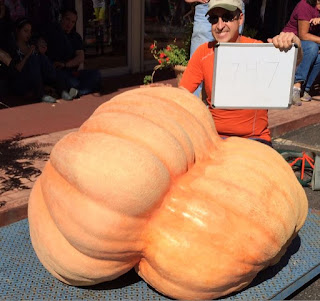 Strong End to the Season

Typically a pumpkin will put on about 66% of its weight in the first half of its growing days (about 45-50 days) and then will put on the remainder of its weight in the last 45-50 days.  My 1985 Miller pumpkin put on about 12% more than the average of its weight in the 2nd half of the season.  That is partially a testament to how much it got screwed up during the irrigation issues, but I think it was also a long grower.  The pumpkin is now about 104 days old and the last I checked it was still growing.  Would really have liked to have grown this seed again to give it a fair shot at its potential.

About a month and a half ago I gave myself the goal of trying to get the pumpkin over 700lbs.  To me that is a really small pumpkin that I have in the patch, but I figured I wasn't going to have a big one so I would at least try to make it interesting.  700lbs at that time was going to be a stretch.  I thought 650 was the best chance I had, but it will be estimating just over 700lbs by this Friday.

I'm going to cut the pumpkin from the vine and take it to Colorado Springs weigh-off on Saturday.  Wish me luck!

Gave the pumpkin plant one final foliar dose of RAW Bloom on Tuesday.  Trying to squeeze out one more extra pound before the weigh-off.
Posted by Jamie at 10/14/2015 04:32:00 PM No comments:

Clone/Cuttings of Pumpkin Plant that Grew a 2,008 Pounder 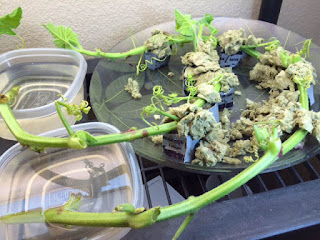 Today I received in the mail a clone/cutting of a plant that grew a 2,008 pound pumpkin.  The plant is a 1730 Werner that Bill Neptune grew in 2014.  Former world record holder, Nick Harp got a clone of the plant that he grew this year and then I got a cutting sent in the mail today.

I've never grown a clone before.  If you have any tips, please let me know.  I went to one of the local grow stores (an advantage of growing in Denver) and got myself educated on cloning and got some rock wool and Clone X rooting agent to help get the plant rooted.  I'll then keep the plant under the lights all winter and then plant the pumpkin plant in the spring to use as a pollinator. Cloned plants I don't think can grow big pumpkins.

Each year we've had a pumpkin in the Arvada Festival of Scarecrows giant pumpkin weight.  My son and daughter took first and second place honors in the children's category.  I think this was the third year in a row that they pumpkins were bigger than everyone.  Great job guys! 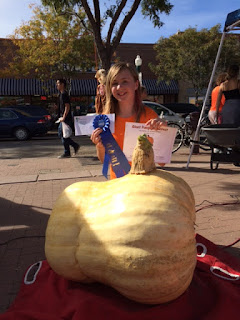 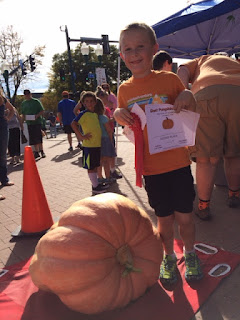 Some Big Pumpkins in Colorado This Year

Next week is my weigh-off.  I'll be lucky if I get to half of my goal for the season, but I get excited for the weigh-offs just the same.

Tonight I gave the pumpkin plants a foliar application of TKO with a little calcium nitrate.  I'll probably give the plants one last application of fertilizer on Tuesday and then we will be done for this year and hope for the best.
Posted by Jamie at 10/07/2015 06:17:00 PM No comments:

Nick's 6th annual great pumpkin weigh-off is this Saturday at 11:00 in Aurora.  See some pumpkins over 1,000 pounds with the potential for a new Colorado state record going to the scale.  Nick's is a great event with a lot of great activities for kids.
Posted by Jamie at 10/01/2015 08:36:00 PM No comments: