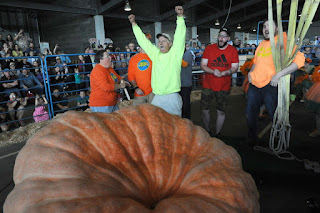 Talked for about 1 1/2 hours with one ton pumpkin grower Dale Marshall this evening.  Really nice guy.  When I saw he popped that 2,051 pounder in Anchorage I was really happy for him and I knew I needed to get him on the phone with him.  I hadn't ever spoken to him before, but I've got a hint of the extra work that he has to put in to grow something like that in that environment and it isn't a small task to start your season in March when it is 20 degrees outside.

His summer days are long, but his nighttime temperatures during the summer are very similar to mine, although his lows are shorter because his sunset is around 11:30pm and his sunrise is around 4:30am.  I wanted to understand how he is dealing with his temperatures, because obviously whatever he is doing is working for him.

What I found is that what he is doing is pretty close in many ways to what I've been doing, just a bit better.  He has a soil heating system that uses radiant heating that is similar to what I'm getting from my geothermal system.  Same types of soil temps.  The biggest piece is he is using a Mr. Heater like I did late in the season this year, but he is doing that all summer long.  I'm not quite ready to put in the money for the propane  yet, but what I've decided I need to do around peak growing time (days 28-42 after pollination) is I'm going to run my heater at night for that period to help maximize growth.  Right now I'm typically at around 54 degrees at night.  I think I can get that up to around 60 degrees with the heater which is about what his nights in his greenhouse are like.  Maybe I can get a few extra pounds a day for those two weeks that way.  If I could get the 50 pounds a day that he was doing at his peak this year I'd be thrilled.

I've talked about in the past about how cover crops (AKA green manure) can build biomass, build biology, suppress weeds, make nutrients more available to plants and a lot of other beneficial things.  One thing I haven't talked about here is some of the potential negatives, but there is an easy fix.  The downside to cover crops is that it can also, in some cases, harbor soil borne diseases and help keep them going.  Things like fusarium can use the cover crop and help perpetuate the disease.  The fix to get the benefits, without the negatives, according to some studies that were done in recent years, is simply not to plant after tilling in the cover crop for 2 to 3 weeks.  As the host plant dies and starts to decompose, the disease dies off with it and it is safe to plant your pumpkin plant. 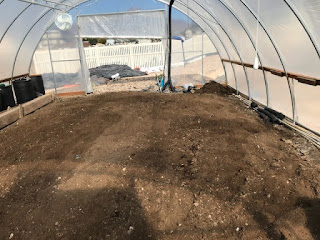 Earlier this week I put down a little compost and today I put down some humic acid, sulfur and a little peat moss which I then tilled in.  After that I heated up the greenhouse to 99 degrees to warm the soil and then put down some winter rye grass seed which will slowly grow all winter.  I'll till it in ahead of the plant as it grows out next season.

I've been bringing in some compost for the patch for next year and adding it to the patch.  My soil scientist had suggested earlier this season to not add any compost this fall, but I decided to ignore with just a thin layer over the patch.   His concern was mostly in regards to nitrogen,which is warranted.  My nitrogen was too high in the patch this year.  However, I know my patch wasn't holding nutrients very well this year so I wanted to add some compost to build up the organic matter to help retain nutrients and also replenish what was lost during this season.  Just a small amount however.

In the spring I'm going to till in some sphagnum peat moss which will add pretty much no nutrients but will add organic matter and I should be in good shape.

On Saturday will I till in some humic acid and sulfur and then plant a cover crop.  That will also add additional organic matter, help suppress weeds and help make nutrients available to the plant next season.

Today I said goodbye to the pumpkin (aka Uncle Sam).  I sold the pumpkin to Pumpkin Nights at the Utah State Fair Grounds.  I'm told about 65,000 people will visit pumpkin nights, so it will be fun to allow so many people to get to see the pumpkin.