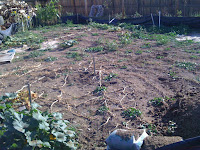 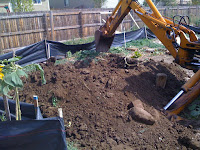 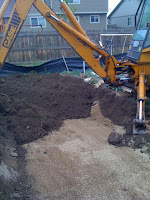 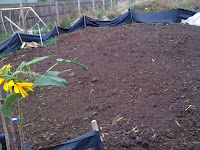 also added a bunch of leaves that were leftover from the big storm as well as some grass clippings. It is already heating up nicely and should be ready for final patch prep in April.
Posted by Jamie at 8/30/2009 09:50:00 AM 4 comments:

A local grower asked me today about the fertilizer program that I use to grow giant pumpkins. It is a good question that is frequently asked by growers of pumpkins and any other garden vegetable. The following is my standard response to that question:

The right amount of fertilizer greatly depends on what your soil and pumpkin plant needs. I know it sounds like a cop out answer but that is the facts. Putting on fertilizer without knowing what is in your soil is like randomly taking penicillin. It might just be what you need and it might just cause you problems. My soil last year was low on everything but phosphorus so I gave it a little more fertilizer at some points in the season. The last two weeks of the season I was concerned that my 755 pound baby might split so I gave it almost no fertilizers prior to the weigh-off.

Ideally what you want to do in the spring is have a soil test done and then amend appropriately based on the results and recommendations from that test. Joe Jutras, the world record holder, last year grew a 1507 pound pumpkin and he didn't fertilize at all after early spring because his soil test showed he was a little high in everything. Personally I like to give the plant a little foliar feeding every week, even if it is just compost tea, because the leaves can absorb a little nutrients and sometime the roots for various reasons can't pull and distribute everything the plant needs very well.

If you aren't planning a soil test (and even if you are) then watch closely what the plant is telling you. If the leaves are yellowing, if the pumpkin isn't growing very well, if the leaves are dull looking, in the early season if the vines aren't growing very fast then the plant is telling you it might need something (or possibly it has to much of something). A good general rule for plant maintenance is about 1/8 cup of fish & seaweed (2-3-1) fertilizer or just seaweed (0-0-5) fertilizer per week or about the same amount of a good organic granular fertilizer (3-3-3). These doses are assuming that you plant's main vine is at least 7 feet long. If your plant is smaller than adjust accordingly. If you just planted your pumpkin plant give it almost no fertilizer for at least the first 10 days after it is planted outdoors. The numbers on the bag or bottle don't have to exactly match the numbers I have listed but should be close. Early season you want a little more nitrogen (first number). Late season you possibly want more potash (last number). These lower numbers will help maintain the nutrients needed to keep the pumpkin growing at a good steady pace.

The Rocky Mountain Giant Vegetable Growers had their annual patch tour yesterday. It is always a lot of fun. Thanks Wiz for taking the time to put it all together. The following are some of the pictures from the tour. 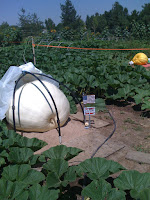 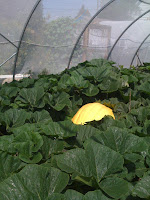 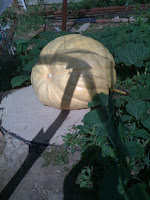