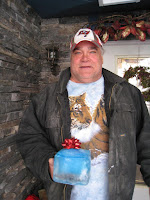 While in Canada for the Holidays with my inlaws the Iceman was was kind enough to swing by and pick me up and take me out to his home and pumpkin patch. Eddy is a super nice guy and I really enjoyed time with him talking everything pumpkins and touring his 4 acre property. Eddy's seed collection is extensive (to put it mildly) and his generosity is legendary. He has at least 4 large boxes full of great and classic seeds and his patch setup is very impressive.

Eddy grew a 1011 pound pumpkin two years ago which beyond impressive. When you live in a place with a short growing season, cool days and cold nights you have to do something special. Especially when there is a risk of snow as late as June. Eddy has 6 green houses with an additional one being built that has heating cables throughout the ground, diesel powered heaters, and an extensive watering system. That is the only way a person could grow a pumpkin that far north and at that altitude. It was fun comparing challenges of growing in Colorado and Alberta 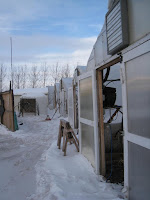 and what needs to be done to grow in high altitude locations. Got some good ideas from the Iceman that I'm going to try next year.

Even with the extensive seed collection that Eddy has he has decided to start growing his own seed lines and he is starting with the classics. He has acquired some of the best seeds from 7 to 12 years ago and he is going to start with some of the origional genetic lines in the hopes of creating some powerful seeds with some very interesting crosses. It will fun to watch to see what happens in Alberta over the next few years.
Thanks for the time and the advice Eddy!
Posted by Jamie at 12/31/2008 09:00:00 AM