The Kids Pumpkin Plant is in Business 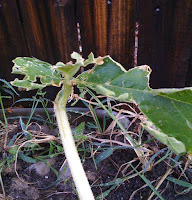 I've been a bit remiss on updates for the kids pumpkin plant. After the storm the plant was devastated. Vines were crushed. Leaves almost gone. I didn't think it had a hope. The damage on their plant wasn't as sever as mine because the plant grows along a south facing fence and the storm came from the north mostly. I don't think the plant was watered for at least a week after the storm but on its own it started to come back. Very slowly new leaves would appear each day. There was even a female flower a few weeks after the storm that we pollinated but the pumpkin aborted. 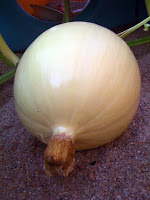 Eleven days ago we pollinated another pumpkin and this one has taken and it is growing like a champ. The plant is only about 100 square feet in size but the pumpkin is putting on gains that are comparable to a full size plant. I think if the weather can stay good until halloween than they should have a descent sized pumpkin (that is a pretty big if however). 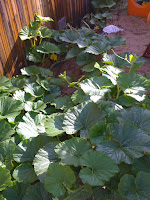 That's awesome Jamie. All I have to say is

Lets hope for a warm fall, no frost and for them to go big!